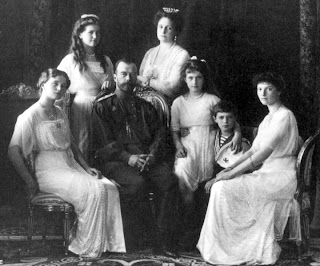 During my college years I became obsessed with the last royal family of Russia. I spent hours in the library reading anything it had to offer on Nicholas II. I was pleasantly surprised when I discovered that Leslie Carroll include a section all about the last Tsar in "Notorious Royal Marriages". Reading the section on Nicholas and his wife Alexandria from a lovers point of view was a whole new aspect for me. One that I thoroughly enjoyed.

The family that was doomed from the beginning shared a unique quality that as Leslie stated "They were exemplary spouses and parents who lovingly raised their five sweet-natured children in a cozy domestic environment". Their marriage being a true love match they never cheated and truly loved each other. 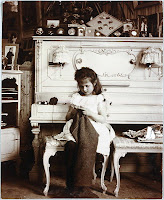 Almost every living person knows of the story of Nicholas daughter Anastasia. She was labeled as the "lost princess". Rumors were fueled by the fact that the location of her burial was unknown during the decades of Communist rule. 20th Century Fox even went as far as to make a cartoon movie about her in 1997 where Rasputin was chasing her as an undead sorcerer fulfilling his promise of "The Romanov Curse". Through out the years after the families demise many women came forward claiming to be the lost princess, one in particular named Anna Anderson stood out from the rest. Some even believed she really was Anastasia. Later DNA test would prove that Anna had no relation to the Romanov family.

Initially I was drawn to their story because of a story my professor had told me. I am really unclear if it is true or not but the story goes that when the Tsarina was being held with her children and they knew that it was all over, she had sewn into their clothing precious gems mostly diamonds just in case they need money for an escape in the future. When the family was to be executed the bullets from the assassins ricocheted off of the gems and that they had to be executed up close. Here is what the wiki says:


"The executioners drew revolvers and the shooting began. Nicholas was the first to die; Yurovsky shot him multiple times in the head and chest. Anastasia, Tatiana, Olga, and Maria survived the first hail of bullets; the sisters were wearing over 1.3 kilograms of diamonds and precious gems sewn into their clothing, which provided some initial protection from the bullets and bayonets. They were stabbed with bayonets and then shot at close range in the head." 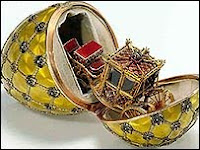 Morbid fascination I know... but then I discovered Faberge eggs. As an artist I was baffled. The detail of craftsmanship is impeccable nothing is even comparable to them. Each one was unique and given for a reason, even if that reason was a just a token of affection for the Easter holiday. The saddest part to me is that to this day there are many missing eggs. Many of them disappeared when the palace was looted. The missing eggs are in chronological order of creation: Hen with Sapphire Pendant, Cherub with Chariot, Nécessaire, Alexander III Portraits, Mauve, Empire Nephrite, Royal Danish.

It would come to be that in our life time the remains of the entire royal family would be found and DNA tested and the family could finally have their peace. Here is the timeline of discovery for the families remains: 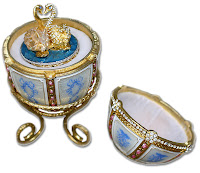 1979: The bodies of Tsar Nicholas II, Tsarina Alexandra, three of their daughters, and those of four non-family members killed with them, were discovered near Yekaterinburg by an amateur archaeologist.

1998: The remains excavated from underneath the dirt road near Yekaterinburg were officially identified as those of Nicholas II and his family excluding one of the sisters, and Alexei. After the testing the remains were finally interred at St. Peter and Paul Cathedral in Saint Petersburg on 17 July 1998, eighty years after they were murdered.

2007: Builder Sergei Pogorelov (part of a team from an amateur history group who spent free summer weekends looking for the lost Romanov's) said that after stumbling on a small burned area of ground covered with nettles near Yekaterinburg he had discovered bones that belonged to "a boy and a young woman roughly the ages of Nicholas’ 13-year-old hemophiliac son, Alexei, and a daughter whose remains also never have been found. Acting on standard procedures, prosecutors reopened the investigation surrounding the deaths of the Imperial Family.

2008: DNA tests performed by a U.S. laboratory proved that bone fragments exhumed in the Ural Mountains belonged to two members of the Imperial Family, Tsarevich Alexei Nikolaevich and Grand Duchess Maria, according to Russian news agencies. Russia's Supreme Court ruled that Nicholas II and his family were victims of political repression and should be rehabilitated.

2009: Results of the DNA testing were published, confirming that the two bodies discovered in 2007 were those of Alexei and his sister Maria. Details relating to the forthcoming burial procedure will have to be discussed by a Russian State commission and by the Moscow Patriarchate.

I have never read a historical fiction read on the family but I would be very interested if one happened to cross my path. In the meanwhile check out the section in "Notorious Royal Marriages" about Nicholas and Alexandra by Leslie Carroll. Leslie even included the couples love entries in Nicholas journal which will just melt your heart and make you fall in love this royal family. Be sure to check out Arleigh's interview with Leslie on Historical Fiction, it is a good one too!