Romeo and Juliet in Art IV: The Duel 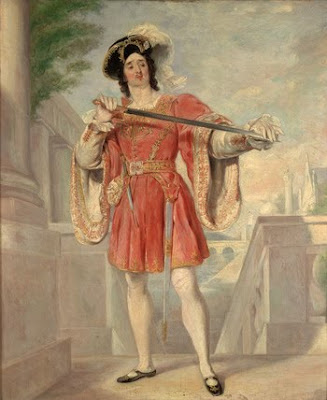 "James William Wallack (c. 1794-1864) as Mercutio. Romeo and Juliet, Act III, Sc.i. Full Length, standing.James William Wallack. Tybalt, who is a Capulet and Juliet’s cousin, picks a quarrel with Romeo, who does not want to fight him. Mercutio, a friend of Romeo in furious; and joins the quarrel. Artist : Crowley, Joseph, Nicholas (1819-1857)"

ROMEO
I thought all for the best.
MERCUTIO
Help me into some house, Benvolio,

Or I shall faint. A plague o' both your houses!
They have made worms' meat of me: I have it,
And soundly too: your houses!
Exeunt MERCUTIO and BENVOLIO
ROMEO
This gentleman, the prince's near ally,
My very friend, hath got his mortal hurt
In my behalf; my reputation stain'd
With Tybalt's slander,--Tybalt, that an hour
Hath been my kinsman! O sweet Juliet,
Thy beauty hath made me effeminate
And in my temper soften'd valour's steel!
Re-enter BENVOLIO
BENVOLIO
O Romeo, Romeo, brave Mercutio's dead!
That gallant spirit hath aspired the clouds,
Which too untimely here did scorn the earth.
ROMEO
This day's black fate on more days doth depend; 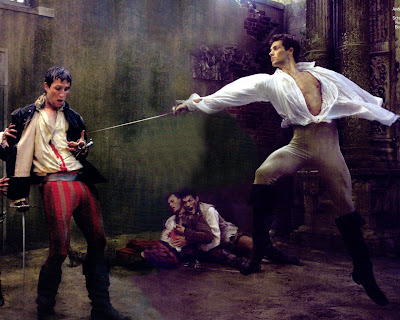 This but begins the woe, others must end.
BENVOLIO
Here comes the furious Tybalt back again.

ROMEO
Alive, in triumph! and Mercutio slain!
Away to heaven, respective lenity,
And fire-eyed fury be my conduct now!
Re-enter TYBALT
Now, Tybalt, take the villain back again,
That late thou gavest me; for Mercutio's soul
Is but a little way above our heads, 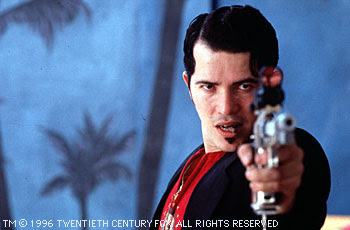 Staying for thine to keep him company:
Either thou, or I, or both, must go with him.
TYBALT
Thou, wretched boy, that didst consort him here,
Shalt with him hence.
ROMEO
This shall determine that.
They fight; TYBALT falls
BENVOLIO

Romeo, away, be gone!
The citizens are up, and Tybalt slain.
Stand not amazed: the prince will doom thee death,
If thou art taken: hence, be gone, away!
ROMEO
O, I am fortune's fool!
BENVOLIO
Why dost thou stay?
Exit ROMEO 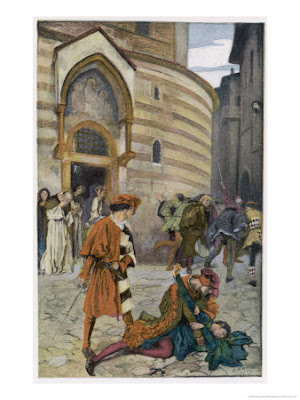 "Dictionary of Literary Biography on Edwin Austin Abbey At a time when the art of book and magazine illustration was at its zenith, Edwin Austin Abbey was recognized as one of its most distinguished masters. Perhaps the most popular and successful artist of his day, Abbey's genius as an illustrator, principally of William Shakespeare's works and English songs and tales, is derived from his crisp and refined pen-and-ink work and from his devotion to historical research and authenticity. "