524 years ago today King Henry VII finally married Elizabeth of York. Daughter of Edward IV and Elizabeth Woodville. Henry was the son of Edumund Tudor and Lady Margaret Beaufort. The marriage united the houses of York and Lancaster thus ending the War of the Roses. She was one of the few women to be daughter, sister, niece, grandmother and wife to the kings of England. 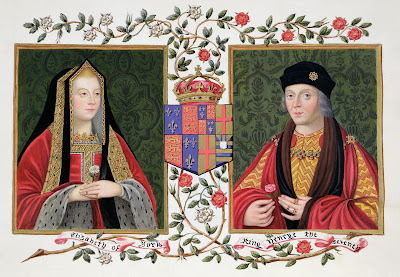 This was the only picture I could find of them together and it was made in the 18th century which means it more than likely is not very accurate.
For more on Elizabeth: