In Honor of the Historical Fiction Blogger event for O, Juliet you can only guess that for this weeks Sunday's Art I would pick none other than Juliet to feature. 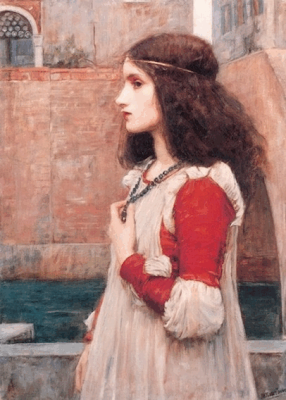 This lovely beauty is by John William Waterhouse. I know there has been some debate on what makes a Pre-Raphaelite. From my research I have discovered it is not just who the painter was but it has to have a few other things to be considered a Pre-Raphaelite painting. One I do know is that it has to go with a written piece. But we will get more into that later I have a whole post coming up soon that has the Pre-Raphaelites guidelines.
I wish I could have found more on Waterhouse's Juliet but I had no luck with this one. 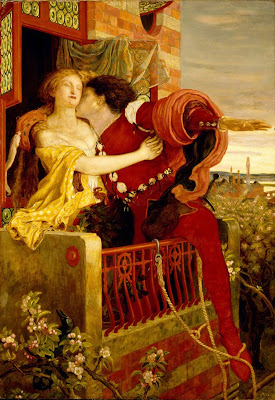 The model for Juliet was Brown's own wife Emma. Since she was past the age of early teen years it is felt that is the reason behind the indistinct faces. Not also to mention that at this time Ford and Emma's marriage was on the rocks. Emma's alcoholism was at a breaking point and Ford was in love with one of his pupils. I believe he was at a point where love in his life was just overwhelming.

It is also said that this piece was made in haste and was not given the full attention of Brown. More than likely because he needed to sell it for money.

Be Sure and Enter for your Chance to WIN a Copy of O, Juliet By Robin Maxwell, Giveaway Ends February 4th at 12 pm