My my my, I loved this novel so much that it hit me like a lightning bolt of creativity. I furiously drew out the drafts for these as soon as I finished O, Juliet. Robin does not go into too much detail on Juliet's appearance. She wants you to let your own imagination become the guide. Robin I LOVED it and will more than likely reread it again.

As you can see the first image is Juliet up close. What I did was scan it into the computer first. Then before I down sized it I cut out some of the picture for the close ups. The full image is below. Below you will also find more up close images I thought were 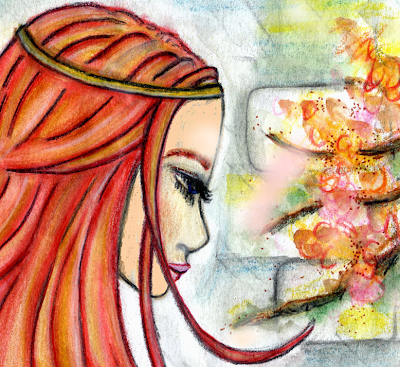 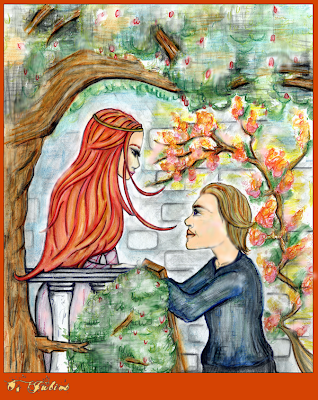 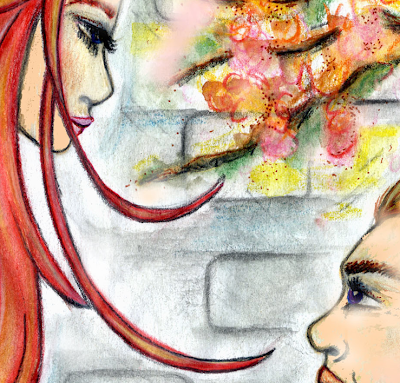 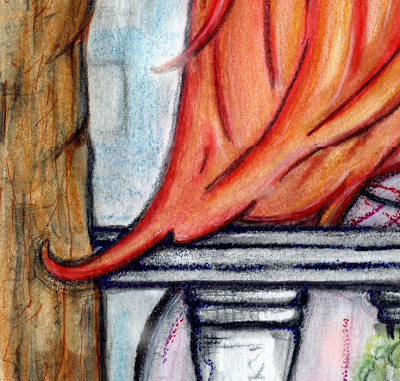 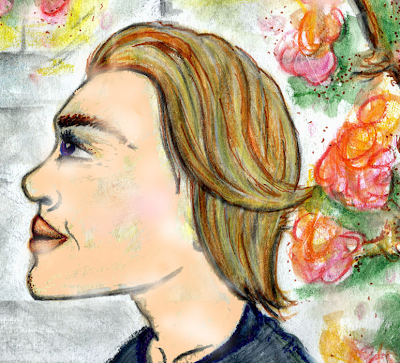 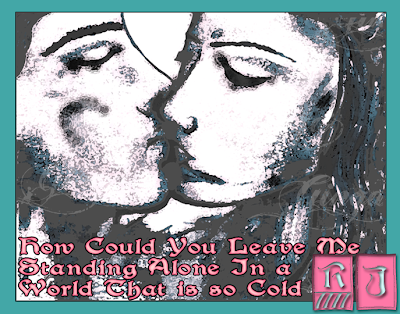 I have come into a phase of accepting my art creations with the help of some very wonderful blogger and commentators. In my past I always wanted to be like other people. Making realistic art, dresses and women, more like the Pre-Rapaelites. I have accepted that it just is not meant to be and have finally felt like I have grown into my own artist skin. I lean more towards the comic book style with a romantic flare. I felt that I had to do something new with this novel but what? After some excellent cheer leading from Allie I decided to broaden my horizons and go bigger. Normally I am not so great with backgrounds or men but these pieces blew me away when I had finished.

Medium you ask? For the balcony scene I laid down a pencil draft first, then a second, and a third. After finally getting the dimensions down I did a really funky thing rather than erasing my pencil I did one more draft. These draft were made by me holding it to a window for the best light. With the vague draft I then did every last inch of it in water color pencil. Leaving as little white on the paper as necessary and not adding any black. Once it reached my satisfaction level I then went to the water. The trees and flowers were more like a wash. After it was done and dried I went onto pens. I broke out the micro point pens and filled in the details like the bark on the tree still not adding black I used mostly brown to give it more of a soft feel. Then I added the black in the few areas it needed it. The crazy part is I had to iron it upside down because it had wrinkled. I changed my paper because in the last few pieces you could see the texture of the paper. Viola it was done.

The last one it very unique to me because I hardly ever use charcoal anymore. I made the sketch in charcoal and just went with it. I still felt it needed more and I went on to test my photoshop skills. Figures when I scanned it in I added a filter to the picture of water color. I then edited the hue to give it a purple ting. I had downloaded some new brushed and added the pink curls. The font was fun I really like my stuff to be full of color and I think I achieved my goal with both of these pieces. The size of the balcony scene is 11x15 and the other is smaller maybe half the size.