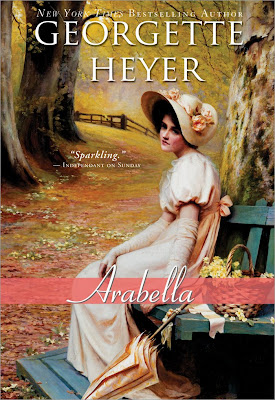 This is one I just could not pass up after reading a review on it over at The Burton Review. I am proud to say I finally read my first Georgette Heyer novel. I was really curious about her books with their beautifully inviting covers. Always they were a thought in the back of my mind. I had always failed on acting on that thought. I am extremely pleased that I ventured into the uncharted territory of regency romances and came back satisfied with what I discovered.

Arabella, sweet and everything that is prim and proper. Growing up in a Vicar's household gave Arabella a sense of duty to uphold all that is right in the world. Having numerous brothers and sisters meant that she had to outside of her small intimate world in the north. Since Arabella was the beauty of the bunch her mother felt she should go to her godmother in London to attract a respectable potently suitor. Her family was not poor but they did not live lavishly. Her endearing mother had saved for years on the hope that her godmother would call for Arabella.

Her time had finally come to depart for a long road trip to London. However a mishap accrued with the carriage her uncle had graciously allowed her to travel in. Being stubborn and naive to other people’s privacy outside of her small world, Arabella insisted on knocking on the closest homestead while the carriage was repaired.

Arabella later would come to find out that the homestead she demanded kindness from was the Nonpareil. The "Tulip of Fashion" for all of England, the devilishly handsome Mr Beaumaris was a confirmed bachelor. Mr Beaumaris was entertaining his closest friend Lord Fleetwood that night. The two were pleasantly passing the time waiting for dinner to be served when Arabella and her nurse mysteriously appeared at the door. After getting the down low on the women at the door, Mr. Beaumaris specifically asked if "one was pretty'? With a "yes" Arabella was welcomed into to room. Mr Beaumaris decided it allow the pretty Arabella to have dinner and warm up by the fire. Picking up on the haughtiness and snobbery from the men in her company she happened to over hear them upon her return from sprucing up a bit. With all pomp and superiority the men were discussing how they (especially Mr Beamaris) was constantly being hounded by fortune seeking damsels and he was sick of it. A confirmed bachelor Arabelle knew what she was about to do to stick it to them was wrong but she did it anyways. She Lied!

The shame if only her father had seen her then. She swept herself into the room with the announcement the she; herself was a really rich heiress of a vast fortune. She had moved on from the north to escape pursuing money hungry suitors. She wanted it to be a secret. Leaving it at that she moved on from her new acquaintances to London. Thinking that would be the end of the little white lie she told. She could not have been more wrong.

The lie followed her to London and unknown to those closest around her, all of her new found supporters were there for one reason and one reason only, money. Arabella put on the whole charade with class and dignity that was quite becoming to a young lady. All the while captivating Mr Beaumaris full attention on her. The proposals started rolling in for Arabellas hand but there was a problem a big problem at that. There was no money like everyone thought there was. Arabella put herself in a pickle of a situation but she had decided she would not marry any man unless he knew the truth. Poor sweet Arabella could she find a man she trusted enough to take into her confidence?

4/5 Awh so sweet a read it makes you feel all warm and fuzzy inside. It was so reminiscent of Jane Austin's Pride and Prejudice. I loved it. I think my issue with Jane is that I am trying to read to hard into it and just could not grasp it. Arabella has created a little bridge for me to cross into understanding of Austen land. Now I see why so many people love her books. I really enjoyed this book it was light hearted and a pleasure to read.

Thank you to Sourcebooks for sending me this one!