The Bloody Tower and The Lost Princes Mystery 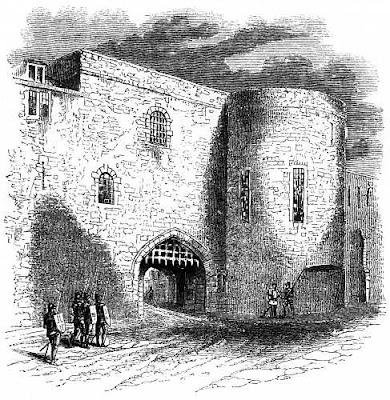 The Bloody tower of London was actually named the The Garden Tower before the Princes disappeared from it. Since I have got Elizabeth Woodville (The White Queen) on the brain I thought it would be interesting to bring to light a fascinating report of the discovery of the "supposed" children's remains found in the chapel of The White Tower during the rein of Charles II. I personally can not believe that Elizabeth Woodville even in sanctuary would hand over her young princes to her brother in law Richard III? Once in Richard's custody the two young princes had been seen playing in the Tower gardens at various times. Gradually, they began to appear less and less. The last person to see them alive was Edward V's physician, Dr. Argentine, who had attended him at the Tower and found him in a state of abject melancholy. The whole mystery could be solved with one DNA test, just one test. All requests for further testing have been denied.


"In 1674, workmen employed in demolishing a staircase within the Tower of London, leading to the chapel of the White Tower, made the discovery of the bones of two children in an elm chest, at around a depth of ten feet. They were originally thrown aside with some rubble until their significance as the possible bones of the two princes was recognized. A number of accounts survive relating to the discovery of these bones, the following account, written on evidence presented by John Knight, Chief Surgeon to Charles II, was published in 1677:-

"Upon Friday the ... day of July, An. 1674 ...in order to the rebuilding of the several Offices in the Tower, and to clear the White Tower of all contiguous buildings, digging down the stairs which led from the King's Lodgings, to the chapel in the said Tower, about ten foot in the ground were found the bones of two striplings in (as it seemed) a wooden chest, which upon the survey were found proportionable to ages of those two brothers viz. about thirteen and eleven years. The skull of one bring entire, the other broken, as were indeed many of the other bones, also the chest, by the violence of the labourers, who....cast the rubbish and them away together, wherefore they were caused to sift the rubbish and by that means preserved all the bones. The circumstances of the story being considered and the same often discoursed with Sir Thomas Chichley, Master of the Ordinance, by whose industry the new buildings were then in carrying on, and by whom the matter was reported to the King.''

"Charles II, then the reigning monarch, asked the architect Sir Christopher Wren to design a white marble container and they were reverently placed in the Henry VII chapel at Westminster Abbey, close to the tomb of the Prince's sister, Elizabeth of York.Due to historical controversy which continued to surround the matter of the fate of the Princes in the Tower, George V gave permission for the exhumation of these bones in 1933. An examination was conducted on the bones by Lawrence Tanner MD, OBE, the Abbey archivist, Professor William Wright, President of the Anatomical Society of Great Britain and Dr George Northcroft, then president of the Dental Association.
Professor Wright concluded that on the evidence of the ossification development of the bones of the vertebrae, he believed these were the bones of two children, the eldest aged twelve to thirteen and the younger nine to eleven. The heights of the two children were calculated to be four feet nine and a half inches and four feet six and a half inches respectively, somewhat taller than their age estimates suggested. (The prince's father, Edward IV, stood at six feet four inches tall). They further stated that a large red stain on the skull of the elder child reaching from below the orbits to the angles of the lower jaw was consistent with death by suffocation, and that congenital missing teeth and certain bilateral Wormian bones (islands of bone) of unusual size and similar shape on both crania were evidence of consanguinity. The lacrimal bone, smallest and most fragile of the face, of one of the boys was abnormal, which suggested, stated Wright, that he had ''cried his eyes out."

Dr. Northcroft, after an examination of the teeth, (the most reliable method for determining age) was in agreement with Wright's findings. Both sides of the lower jaw of the elder child, presumed to be Edward V, exhibited extensive evidence of the bone disease, osteomyelitis, a chronic and in medieval times, incurable condition.
The Tanner and Wright report and accompanying photographs of the bones have been subject to expert scrutiny on many occasions since then. Modern conclusions vary. There is consensus of opinion among modern experts that Wright's determination of the ages of the skeletons and the age differential between the two sets of bones is approximately correct, although great differences of age calculated by the development of bones and teeth has been observed in studies. Later reports claim to be unable to determine the sex of either skeleton. Determination of consanguinity by congenitally missing teeth or bilateral Wormian bones remains disputed although the skull of Anne Mowbray, the younger prince's child bride who died in 1481, a distant relative of the princes, also displayed similar congenital missing teeth. As regards the staining which is present on one of the skulls, without chemical testing it remains unproven that it is actually a blood stain and modern experts deny it being proof of suffocation. In the absence of modern carbon dating or DNA analysis on the forensic evidence of the bones, it is still not possible to say that these are the bones of Edward V and his brother. The Abbey authorities have to date refused a second examination." EnglishMonarch