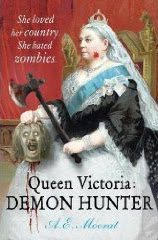 Releasing in Paperback in October 2009
I have to agree with Susan Higginbotham, this is very interesting. I enjoyed Anne Rice's Vampire Chronicles in college. I eventually grew towards the historical aspect of the novels. The only king I could ever really visualize as pulling off the vampire story would have to be Edward II. Queen Victoria makes a believable vampire killer in this cover though. I am a wuss though and can not stand anything really scary. This I might try, but if I got scared I would leave it in the freezer.


"The novel takes you to the smoggy, cobbled streets of Victoria's vile and villainous Britain, but not as you know them ...A layer of horror will be seamlessly woven in to comedic effect. You'll meet Queen Victoria not as the bitter old widow forever draped in black, but transformed into an ass-kicking killer of evil creatures. It will be so scarily convincing that you'll be certain that in the dark days of Queen Victoria, it was more than just the pick-pockets you had to look out for. This masterly new portrait will give a fresh understanding of a remarkable woman, a legendary monarch, and quite possibly the best Demon Hunter the world has ever seen. A E Moorat weaves a seamlessly lurid tapestry of royal biography, gothic horror and fist-gnawing comedy as he lifts the veil on what really took place on the dark and cobbled streets of 19th-century England."