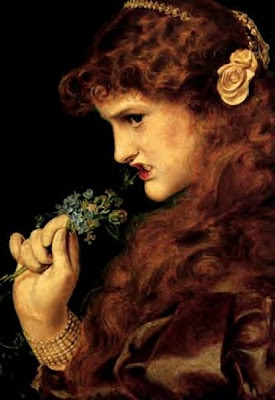 Mary Emma Jones was a London actress she was Sandy's favorite model. She also his lover at this time eventually the two married and later had ten children. This piece was made while the impoverished Sandy's spent time living with Dante Rossetti. Rossetti was renowned for his generosity toward his fellow artist. The relationship turned sour when Rossetti accused Sandy's of plagiarism.

I like this one because she looks so awry or a bit stressed like seeing a lover with another woman after he gave her a flower.