I really find this particular day in history very intriguing. For a few reasons one being that today January 28th 1457 King Henry VII was born. Then exactly 100 years later his son Henry VIII died on January 28th 1547. Weird fluke of fate or just a coincidence? I am not sure but either way it is kind of creepy. Maybe him and his father were more alike than they ever thought possible. 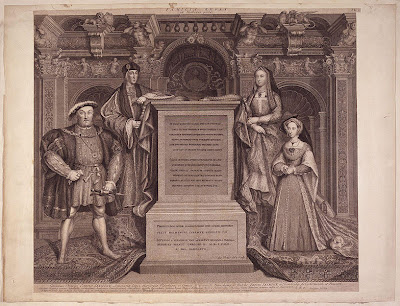 This was the only piece of art I could find with both of them together. In the back it is Henry VII with Elizabeth of York. In the front it is Henry VIII and Jane Seymour.
Happy birthday Henry VII