Today In History, Louis XVI Makes the long walk to the Madame Guillotine 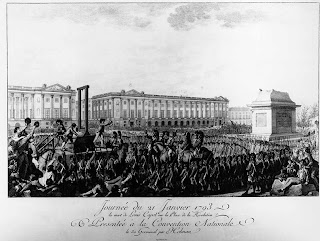 217 years ago today Louis XVI lost his life to madame guillotine at the hand of the French Revolutionist. He went to his death alone and brave. He was so close to making it that a motion to grant Louis reprieve from the death sentence was voted down; 310 deputies requested mercy, 380 voted for the execution of the death penalty. Such a slim margin and yet no mercy.

"As Louis mounted the scaffold he appeared dignified and resigned. He attempted a speech in which he reasserted his innocence and pardoned those responsible for his death. He declared himself willing to die and prayed that the people of France would be spared a similar fate."

For more on Louis's family:
The Fate of his Son Louis XVII
Marie Antoinette's Execution
The Storming of the Tuilleries