A Talk with C.W. Gortner Author of The Last Queen 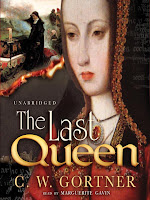 How did the idea for THE LAST QUEEN originate?
I’m often asked how I became interested in Juana la Loca. I can’t remember a time when I wasn’t. I was raised in Spain (I am half Spanish by birth and fully bilingual). My maternal grandfather, Tomás Blanco, was a famous film actor in Spain whose career spanned from the early 40s well into the 70s; and my grandmother Pilar Gomez del Real was a well-known theater actress who portrayed Juana on stage. I lived near a castle that had belonged to Juana’s parents, Isabella and Ferdinand. Clambering to its highest tower, I knew Juana had touched these same stones, perhaps marveled, as I did, at the landscape’s beauty.

During a school trip to Granada, where Juana is buried, I found myself entranced by the marble effigy of this woman, whose face is turned away from the figure of her dead husband beside her. Most school children in Spain know the tale of Juana la Loca; she is legendary. But I immediately wanted to know more. What was she like in real life? Did she really pull her husband’s bier behind her throughout the country, venerating his corpse? What happened to her to plunge her into such despair?

Love is madness. And Juana la Loca is famous for both. But what if her legend only told half the tale? My vision of this vibrant princess who became the last queen of Spanish blood to inherit the throne was at odds with the bereft queen of legend. THE LAST QUEEN is the first novel about Juana written in English in twenty years. I felt she deserved a chance to tell her side of the story.

How long did it take you to write, and what special research was involved?
It took five years for me to write THE LAST QUEEN. As far as special research is concerned, I took two separate trips to Spain, including one in which I undertook the very journey Juana made from Burgos to her last home in Tordesillas. I visited the Alhambra and the castles associated with her, and read every contemporary account about her that I could find, including letters from her custodians to Charles V, which are currently archived in Simancas.

It is interesting to note that during General Franco’s dictatorship (the last years of which I experienced as a child), some of the documents in the Simancas were restricted to scholars who required special permission to access them. The documents pertaining to Juana were included in these restrictions. I found it particularly fascinating that hundreds of years after her death the government still found it necessary to “hide” certain evidence about her. However, by the time I was researching, the documents were available and they provided an invaluable, if at times chilling, framework for the novel in terms of which parts of her life I wanted to focus on.

How do you strike a balance between history and fiction? Do you think accuracy remains a primary obligation of all historical fiction?
The balance between fact and fiction in an historical novel like mine is often a delicate one. It can even become tenuous, in particular when you are confronting issues of religion, race, sexuality, and gender. I write about people in the 16th century; I do not share their beliefs. The Renaissance was a brutal, quixotic, and complex time in history: As much as I strive to bring it to life for readers, the truth is we can never truly understand what it was to actually live in the 16th century. The best even a very gifted historical novelist can achieve is a close approximation.

That said, I do consider historical accuracy a primary obligation—in that the writer should not deliberately alter or distort known facts or have characters behave in overtly modernized way, just to suit a particular publishing fad or temperament. To have my lead character march at the head of an army like Joan of Arc, for example, would fly in the face of every known fact about her.

However, facts are only a small part of a life filled with moments, and in the final say, I write fiction. My books are novels; their principal function is to entertain. I hope my readers will become immersed in the story, that they will feel it on a sensory level. I also hope, as a secondary objective, to awaken interest in the time itself. If someone reads my book and thinks, “I want to know more about Spain in the 16th century,” then I’ve done what I set out to do. Likewise, if someone reads my book and writes to me, as they have, saying, “I couldn’t wait to turn the page,” that, too, accomplishes my goal as a novelist.

THE LAST QUEEN is told in the first person by a woman. Did you find it difficult to write?
I actually enjoyed the challenge of telling Juana’s story in the first person. My first drafts were in third person and something elusive was missing. It was only after I allowed myself to slip into Juana’s skin, so to speak, that I began to experience her emotional complexity. There’s a general fallacy that men cannot write women as well as women can. I disagree, just as I disagree that women cannot write from the male perspective. Writers must inhabit their characters in order to bring them to life. We are not limited by gender or appearance. We are invisible. There are no limits other than our imagination.

What do you hope readers take away from your work?
I seek to reveal secret histories. Whether it’s Juana of Castile’s alleged madness or Catherine de Medici’s reputation for evil, I strive first and foremost to entertain. I also hope readers will come away from my work with the experience that they’ve been on an emotional journey. I want them to feel the way these people lived, their hardships and joys, and differences and similarities with us. Though a Renaissance queen faced issues we don’t, love, hatred, power, intolerance, passion, and the quest for personal liberty are universal themes.

What is your latest project?
I am currently working on a historical novel about Catherine de Medici, tracing her life from her tumultuous childhood in Florence to her rise to power as queen-regent of France and mother of the last Valois kings. Catherine has been widely maligned and, I believe, misunderstood. Her leadership and tenacity forestalled the end of the monarchy in France by two hundred years. Without her, the history of Europe and France in particular would be very different. As a contemporary of Elizabeth I and mother-in-law to Mary, Queen of Scots, she is one of a triptych of powerful women ruling in the 16th century.