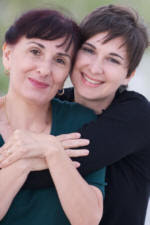 While most women can’t imagine working with their mother or daughter without causing major trauma to their relationship, for mother-daughter writing team Jane Rubino and Caitlen Rubino-Bradway, the process brought them closer together. The two recently collaborated on their first work together, LADY VERNON AND HER DAUGHTER: A Jane Austen Novel (Crown; October 6, 2009), a delightful retelling of one of Jane Austen’s early, untitled works that she had never finished, and say their working relationship gave them new found respect for each other.

LADY VERNON AND HER DAUGHTER is based on an epistolary novella generally referred to as “Lady Susan,” which follows the plight of Lady Susan Vernon, a beautiful and cunning widow who schemes to secure a wealthy younger husband for herself, and a foolish nobleman for her daughter. Jane and Caitlen, both avid readers of Jane Austen, have taken letters from this epistolary novella and transformed them into a vivid, authentic, and more recognizably “Austen” work of fiction. In this enthralling reimagining, Lady Vernon and her daughter must navigate a society where a woman’s security is at the mercy of an entail, where love is hindered by misunderstanding, where marriage can never be entirely isolated from money, yet where romance somehow carries the day.

Just as the heroines of their novel work as a team to successfully find their way through Regency society, Jane and Caitlen worked in tandem to piece together LADY VERNON AND HER DAUGHTER. To do so, they painstakingly reexamined Austen’s six great novels in order to reproduce her distinctive style and the fundamentals of her storytelling. The result is a delightful interpretation and a treat for fans of literature’s most beloved woman of letters.

JANE RUBINO BIOGRAPHY:
Jane Rubino holds a BA from NYU in Dramatic Literature, Theatre and Cinema. She lives in Ocean City, New Jersey and is the author of a contemporary mystery series set at the Jersey shore, and a volume of Sherlockian novellas. She has also written several short screenplays that have been produced as student and independent films; one of the films was recently awarded a jury prize at San Francisco's annual WYSIWYG Film Festival. She and her husband of 36 years have three grown children and a number of beloved dogs.


CAITLEN RUBINO-BRADWAY BIOGRAPHY:
Caitlen Rubino-Bradway holds a BA in English Literature and an MA in Publishing from Rosemont College. While in college, she interned with LeFrak Productions, Tor, and Jane Dystel Literary and received the Margaret Humphrey Award for Creative Writing. She was raised in Ocean City, New Jersey and now lives and works in New York City, where she is currently perfecting her recipe for peach cobbler.