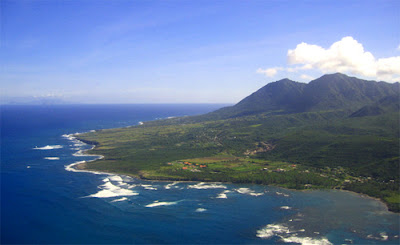 I just could not help myself after reading Erika Robuck's "Receive Me Falling" Nevis Island is lingering in my mind. I found some really interesting historical landmarks that I just had to share. If you would like to see more on Nevis Island check out the photo gallery.

Located in the countryside, about 30 minutes from Charlestown, the Eden Brown Estate was originally a sugar plantation, but cotton was grown there until the mid-1900's. But the circa 1740 plantation, with a great house and other outbuildings has a history unlike many of the other plantations, and some believe it is haunted. A duel took place at the house in 1822, the night before the wedding of Julia Huggins, between her betrothed and the best man, who was her brother. A recent discovery of an old letter has shown that the bridegroom survived, and he went to propose to another woman. However, her father forbade her from marrying a "murderer." As the story goes, Julia spent the rest of her days as a recluse in the house, and can still be heard today as she wanders through the ruins.

On the grounds of the Montpelier Plantation-under the branches of a silk cotton tree-Lord Horatio Nelson wed the Nevisian widow Frances Nisbet on March 11, 1787. Prince William Henry, who eventually became King William IV, gave away the bride at this well-known affair. The marriage certificate is carefully preserved at St. John's Fig Tree Church. The entrance pillars to the estate are still there but the original Great House has been gone for many years. Two hundred years later, on March 11, 1987 a group of hoteliers in collaboration with the Nevis Historical and Conservation Society organized a week of activities to celebrate the 200th anniversary of Lord Nelson's association with Nevis. As part of these activities, the marriage of Lord Nelson and Frances Nisbet was reenacted at the site with a great festivity reminiscent of 1787.
Source