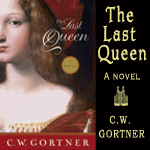 Excerpt from Chapter One "The Last Queen" by C.W. Gortner
Ballantine Books copyright 2008

We entered Granada in resplendent procession, the battered crucifix sent by His Holiness to consecrate heretic mosques carried aloft before us, followed by the nobility and clergy. Discordant wailing sundered the air. The Jewish warehouses were being impounded. Gorged with fragrant spices, yards of silk and velvet, and crates of medicinal herbs, the market represented Granada’s true wealth, and my mother had ordered the wares secured against looting. Later, she would have them inventoried, tallied and sold to replenish Castile’s treasury. Riding with my sisters and our ladies, I gazed in disbelief upon the ravaged city. Shattered buildings stood empty, seared by flame. Our catapults had leveled entire walls, and the stench of rotting flesh wafted from the mounds of broken stone. I saw an emaciated child standing motionless beside some dead rotting animal bound to a spit; as we passed, gaunt women knelt in the ruins. I met their impenetrable stares. I saw no hatred or fear, no remorse, as if the very life had been drained from them. Then we started to ascend the road to the Alhambra—that legendary palace built by the Moors in their flush of glory. I couldn’t resist rising in my saddle to peer through the gusts of dust kicked up the horses, hoping to be the first to see its fabled walls. Someone cried out. Around me the women pulled their mounts to a halt. I looked about in bewilderment before returning my gaze to the road ahead. I froze. A high tower thrust into the sky like a mirage. On its parapet I could see a tiny group of figures, the wind snatching at their veils and flimsy wraps, light sparkling on the metallic threads woven through their gowns.

Behind me Dona Ana hissed, “Quick, cover the child’s face. She must not see this.” I swiveled in my saddle to look at Catalina. My sister’s eyes met mine in fearful confusion before one of the ladies pulled the veil over her face. I clenched at my reins, turning back around. A cry of warning hurtled up my throat as I saw, in paralyzing horror, the figures seeming to step out over the parapet, like birds about to take flight. Around me, the ladies gasped in unison. The figures floated for an impossible moment in the air, weightless, shedding veils. Then they plummeted downward like stones. I closed my eyes. I willed myself to breathe. “See?” chortled Dona Ana. “Boabdil’s harem. They refused to leave the palace. Now, we know why. Those heathen whores will burn in hell for all eternity.” All eternity The words echoed in my head, a terrible punishment I could not imagine. Why had they done it? How could they have done it? I kept seeing those fragile forms in the pin-pricked darkness behind my eyelids, and as we rode under the Alhambra’s gateway, I did not point and laugh with the other women at the broken bodies strewn on the rocks below. My parents, Juan and Isabella swept ahead with the nobility. Maria, Catalina and I remained behind with our women. Taking Catalina by the hand and hushing her anxious questions (for she knew something terrible had happened) I gazed at the citadel. With the afternoon light turning to vermilion on its tiled facade, it appeared blood-soaked, a place of death and destruction. And still I was overwhelmed by its exotic splendor.

The Alhambra was unlike any palace I’d ever seen. In Castile, royal residences doubled as fortresses, encircled by moats and enclosed by thick walls. The Moorish palace had the mountain gorge for protection, and so it sprawled like a lion on its plateau, sheltered by cypress and pine. Dona Ana motioned to Maria; together with our ladies-in-waiting, we marched into the audience hall. With Catalina’s hand still clutching mine, I took in everything at once, my heart beating fast as I began to see just how magnificent the Moor’s world was.