Book Review: MY CAT HATES YOU by Jim Edgar 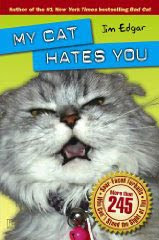 I just had to do this because this book has been a constant in my life lately. I originally bought this book for my husband on his birthday as a joke. We have cat issues here and it took me 5 years to convince him to let me get a cat. He always said "NO CATS" but my daughter wore him down and we got a kitty. Sadly that sweet cat did not make it a year, he got really sick and passed away. I later by chance was giving a beautiful Siamese cat that we named Ninja.

Sometime after that I went to the cat adoption place where we got the first cat and this sweet baby cat grabbed my pant leg through the cage and my heart melted. I had to leave him there but my mind would not let him go. I broke my husband down and he told me "Go get Your Cat, just leave me alone". I brought him home and he has been my baby ever since.

We had a incident in the backyard late one night (I was asleep). One thing led to another and the cat got out, got into a fight with the dogs and my husband tried to break it up and in the process got bit by my baby. It was terrible my husbands hand blew up to 2 times the normal size. Lets just say he had to go to the ER the next day. When he got there they did an X-ray and the cat had broken a small bone in his hand. Not to mention he had to get a tetanus shot and have his hand all wrapped up. At one point it even had to be lanced to bring the swelling down. Poor husband attacked by a cat he never even wanted.

I got this for him to keep at his work desk to make him laugh anytime he was having a bad day. The book is compiled of funny pictures of cats doing crazy things. Lets just say it never made it to work and it is my daughters favorite book. If you ever want a good laugh pick this one up.

5/5 because it still makes me laugh every time I read it. 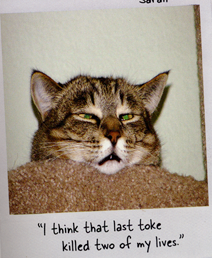 "More than 245 Sour-Faced Furballs Who Can't Stand the Sight of You
Before there were lol cats, there was Bad Cat. Now, in his first book since his #1 New York Times bestseller, Jim Edgar reveals what cats really think of you: not much.
Straight from his website, personal archives, victims' accounts, and anonymous underground sources, My Cat Hates You brings to light a conspiracy against mankind that reaches across the globe. Whether they're going fishing in the family fishbowl (or toilet), attempting to blast off to Mars when you aren't looking, mocking your taste in bed sheets, self-medicating with catnip, or hanging from the rafters ready to pounce, the delinquent cats within these pages can't conceal their contempt for you.
Keep this book out of reach of children and especially cats -- they don't need the encouragement."