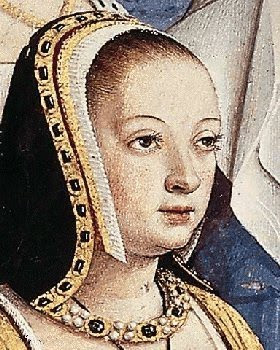 "In France, England, and the Low Countries, black hoods with veils at the back were worn over linen undercaps that allowed the front hair (parted in the middle) to show. These hoods became more complex and structured over time.

Unique to England was the gable hood, a wired headdress shaped like the gable of a house. In the 1500s gable headdress had long embroidered lappets framing the face and a loose veil behind; later the gable hood would be worn over several layers that completely concealed the hair, and the lappets and veil would be pinned up in a variety of ways.

A simple rounded hood of the early years of the century evolved into the French hood, popular in both France and England; its arched shape sat further back on the head and displayed the front hair which was parted in the center and pinned up in braids or twists under the veil.

German women adopted hats like fashionable men's baretts early in the century; these were worn over caps or cauls (colettes) made of netted cord over a silk lining.[13] Hats became fashionable in England as an alternative to the hood toward the 1540s. Close fitting caps of fur were worn in cold climates.

Linen caps called coifs were worn under the fur cap, hood or hat.

In warmer climates including Italy and Spain, hair was more often worn uncovered, braided or twisted with ribbons and pinned up, or confined in a net. A Spanish style of the later 15th century was still worn in this period: the hair was puffed over the ears before being drawn back at chin level into a braid or wrapped twist at the nape.

First-time brides wore their hair loose, in token of virginity, and a wreath or chaplet of orange blossoms was traditional. A jeweled wreath with enameled "orange blossoms" was sometimes worn." Wikipedia