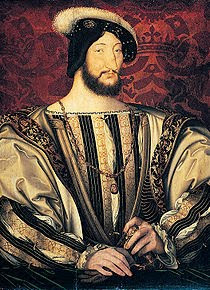 On September 12Th 1494 Francis I of France was born.
He was crowned king of France in 1515 in the cathedral at Reims and reigned until his death. Francis I is considered to be France's first Renaissance monarch. His reign saw France make immense cultural advances.

He was also a rival of Henry VIII, and they even competed in their womanizing skills. Anne Boleyn's sister Mary was Francois's mistress until he passed her off to Henry. Which his pious wife Claude probably did not like but she never said a word about his womanizing games.

On 31 March 1547, on his son and heir's 28Th birthday. It is said that "he died complaining about the weight of a crown that he had first perceived as a gift from God"