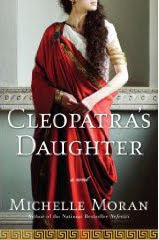 Thank you Michelle Moran for being gracious enough to give a guest post featuring her upcoming new release Cleopatra's Daughter. Which is due to hit book stores September 15Th 2009. This Q and A struck me so close to my heart because her experience is one of my biggest secret dreams I have ever harbored.

A:"It began with a dive. Not the kind of dive that people take into swimming pools, but the kind where you squeeze yourself into a wetsuit and wonder just how tasty your rump must appear to passing sharks now that it looks exactly like an elephant seal. My husband and I had taken a trip to Egypt, and at the suggestion of a friend, we decided to go to Alexandria and do a dive to see the remains of Cleopatra’s underwater city. Let it be known that I had never done an underwater dive before, so after four days with an instructor (and countless questions like, Will there be sharks? How about jellyfish? If there is an earthquake, what happens underwater?) we were ready for the real thing.

We drove to the Eastern Harbor in Alexandria. Dozens of other divers were already there, waiting to see what sort of magic lay beneath the waves. I wondered if the real thing could possibly live up to all of the guides and brochures selling this underwater city, lost for thousands of years until now. Then we did the dive, and it was every bit as magical as everyone had promised. You can see the rocks which once formed Marc Antony’s summer palace, come face to face with Cleopatra’s towering sphinx, and take your time floating above ten thousand ancient artifacts, including obelisks, statues, and countless amphorae. By the time we had surfaced, I was Cleopatra-obsessed. I wanted to know what had happened to her city once she and Marc Antony had committed suicide. Where did all of its people go? Were they allowed to remain or were they killed by the Romans? What about her four children?

It was this last question which surprised me the most. I had always believed that all of Cleopatra’s children had been murdered. But the Roman conqueror Octavian had actually spared the three she bore to Marc Antony: her six-year-old son, Ptolemy, and her ten-year-old twins, Alexander and Selene. As soon as I learned that Octavian had taken the three of them for his Triumph in Rome, I knew at once I had my next book. This is how all of my novels seem to begin – with a journey, then an adventure, and finally, enormous amounts of research for what I hope is an exciting story"