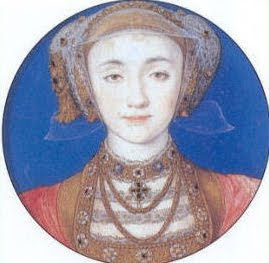 Anne of Cleves, a woman who had no idea what she had gotten herself into when she stepped foot in England to marry Henry VIII. The arraignments for the marriage had been made by Cromwell and boy did he pay for it, with his own head.

Henry did not like Anne from the beginning. He had called her "The Flanders Mare" meaning she was ugly. Which I do not think so judging from this portrait. I think Henry did not like her because she was not like the previous other women in his life. She was far from glamorous but she did have a good heart and in the end Henry did recognize that.

The end of the marriage was that Henry had it annulled on the grounds that the marriage had not been consummated. Luckily Anne escaped with her life and Henry gave her a very good settlement. She lived the rest of her days in England labeled as "The sister of the King". Though she never married again or had any children. She was happy to escape her childhood home where her oppressive brother ruled.