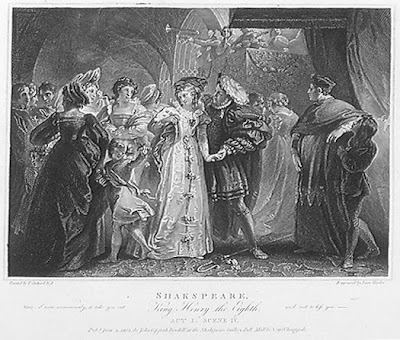 Happy Birthday Henry VIII, born June 28Th 1491. Bed, wed, and behead was Henry's norm. I have posted many articles about the wives of Henry, especially Anne Boleyn because she is my favorite. Today is Henry's day and yes he did have six wives. First, Catherine of Aragon died in banishment from the court. Second, Anne Boleyn was beheaded on Henry's trumpet up charges on adultery and incest. Third, Jane Seymour died shortly after giving birth to Henry's son. Fourth, Anne of Cleve's marriage was annulled because it was never consummated. Fifth Catherine Howard ( wife number two's cousin) was beheaded for adultery. Sixth Catherine Parr was the only one who lived past Henry. It has been speculated that he would have divorced her too if he had lived longer. She was a good nurse to Henry in the end. She went on to marry Thomas Seymour (brother of wife three).

Henry was an avid sportsman. He enjoyed hunting, jousting, wrestling, and anything else physical. Obviously he was arrogant but he also enjoyed the softer things of life like composing music and poetry. He was a constant supporter of the liberal arts, employing Hans Holbein in his court. He was also dedicated to higher learning and contributed to the colleges often.

Henry had a special quality a glittering magnetism that made people drawn to him not only because he was king but because they were drawn to him. Like an Arabian horse drawn to an oasis in a desert. He was a deeply religious man, whether it changed from catholic or protestant. Daily he went to church and read from the scriptures. He was a faithful man to his beliefs but was never faithful to any of his wives. He would change everything, no one would be safe from the kings wrath, not even the church. The Act of Supremacy in 1534 declared that the King was "the only Supreme Head in Earth of the Church of England" and the Treason Act 1534 made it high treason, punishable by death, to refuse to acknowledge the King as such. England separated with Rome leaving many theological issues for many successors to follow.

Crazy that in this life I should be so lucky as to be very close to two people that share the same birthday. First of all my mother in law, second my sweet daughter who happened to be born five days over my due date. They all share the same birthday June 28Th, and I swear moody, moody, crabby crabs. I feel it is only fitting to include his astrology sign, it opens a window to what type of person he was.

"As we enter the Golden Age of Aquarius, you are ready to receive all the blessings that are there for you, especially in the areas of communications and relationships.
Being understood and getting the responses you desire helps you believe in your ability to succeed and reach your highest potential. Your focus is excellent, and you know what you want. Use this to your advantage when working with others, but don't demand that they see your ideas as visionary -- even if you do. As ideas start flowing freely to you, make sure you articulate your insights clearly.
This year, you will be strongly motivated by transformation, especially in romantic unions. When balanced in your heart and mind, you easily express your emotions and are quick to support others. It is important for you to have a partner who is willing to explore different ways of doing things. You will experience many changes as you learn new ways of expressing yourself.
As you make this shift, avoid putting restrictions on yourself and stopping the flow. You are learning to behave in a new positive way, not worrying about the outcome. This will curb your need to control situations and enable you to take your relationships -- work and personal -- to a higher level of consciousness."