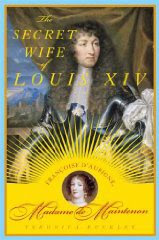 How Exciting, this has really sparked my interest. I recently read & reviewed The mistress of the Sun King by Sandra Gulland, and it left a lasting impression on me. This novel falls into the follow up time period. The woman who usurped the wicked witch of France Athénaïs.


The Marquise de Maintenon, mistress of Louis XIV, was born in a bleak French prison in 1635. Her father was a condemned traitor and murderer who seduced the warden’s daughter. Yet in her lifetime, Françoise d’Aubigné—armed with beauty, intellect, and shrewd judgment—managed to make her way from grimmest poverty to the center of power at Versailles, the most opulent and cutthroat court in all Europe.

This is the extraordinary story of Françoise’s progress from brilliant salonnière to governess for the king’s illegitimate children and, finally, to the delicate position of Louis’s secret wife and uncrowned queen. Louis, who as supreme sovereign believed he had entrée to any bed he chose, would remain in love with her for forty years. Bursting with the gossip of such witty contemporary chroniclers as Madame de Sévigné, this exactingly researched biography is a pinnacle of the form. In vibrant, shocking colors, it paints a portrait of France in the process of becoming itself, and Europe in an age of violent change.