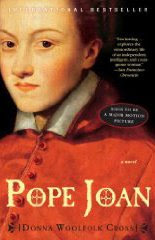 Being set in the 9Th century Pope Joan's extraordinary one of a kind story humbles a person to be grateful we do not live in such times anymore. At the end a reader question was asked of why the brutality? I personally had come to expect a extreme brutality since it is the 9Th century, not 19Th century and in my mind set I had pictured an extreme living. A time of darkness in which life was unforgiving and most cruel. Many were lucky if they happened to make it past twenty five. Sleeping on the dirt with animals is literally what had come to my mind. In this time women were also objects of possession, thought to be completely with out sense or thought. My personal feelings of why I love historical fiction so much is it brings life into prospective. That we are so fortunate to have evolved into a era of higher learning, science, and are encouraged as women to our own self empowerment. That we may choose our own fate and destiny, and we can reach for the sky and there is no limit to what is up there.

Joan grew up with her father "The Cannon" and her mother Gundrun "the heathen", she also had two older brothers Mathew and John. The Cannon was cruel in his firm religious belief. He had brought her mother back with him from a missionary in Saxony. Pushing his sons to a higher learning and forcing his daughter and wife into abusive submission. "A woman's hair, her husband said, is the net wherein Satan catches a man's soul". Her oldest brother Matthew taught her secretly how to read and write, all the time being afraid of what the Cannon might do if he found out. Matthew perished and with him all Joan's hope of an education. Hopelessly she showed her father she could read and she paid for it almost with her life. Joan had developed very early in life a sense of how to fight for her right to survive, her unbreakable spirit, and even on the verge of death would not surrender her spirit. She made it over hurdle after hurdle after hurdle in a mans arena with out truly ever reaching a point of safe ground even in her own household.

Her courage and ability to question led her to some very interesting people who would play an important role in her life. The first was her Greek tutor Aesculspius who had arrived to teach her brother but he took Joan as a student instead and had to be coerced into teaching her brother John. I firmly believe everyone has a destiny. Sometimes we have to fight for it even if we do not know what it is we are fighting for. Joan is a perfect example of this, she was smart, smarter than most, she knew it, and it got her into trouble. Escaping her father's wrath, Joan went onto the schola to further her education, her Greek tutor had found her a place there even though it was a boys only school. There she was to meet Gerold, the knight in shining armor. He spoke up for her in the beginning and took her in as his ward. She lived with his family and worked on her education continuously fighting the constant threat she posed as a woman among men. Until the fateful horrific attack on the town by Vikings. Joan the woman died but John the man (her deceased brother) lived just long enough to escape the horror, and flee.

In a string of events Joan ends up in Rome after leaving the monastery of Fulda where she had lived for many years after the Vikings attack in her disguise as John. A inquisitive mind such as Joan's, it figures she would become what they called a doctor, she had the unquenchable thirst for knowledge, always questioning. Fully devoting herself to her philanthropy work previously at the monastery and now to the throne of St. Peter. She went where help was needed and with out fear. In Rome she was John. She never forgot that there were people out there who had nothing, came from nothing, that society expects them to stay nothing hiding in the shadows. Refusing to give up on people, she deeply cared, where there is a will there is a way. It led her into becoming Pope, she never gave up reason for the people. One determined "old soul" who always thought of others first and foremost. A woman as Pope, unthinkable right? How would they even think to question with out a reason or a cause.

I loved this book I was kind of getting bored after my last review. Where nothing seems pleasing, floundering in the wind, and nothing really grabbing me. This was just what I needed. It gave me the ump I needed to go back to my TBR list. Thank you Donna for so graciously sending me a copy to review, it was a pleasure! I will be patiently waiting for her next book which is to be set in 17Th century France, ooh. Also the book will be a movie, set to come out soon, and which is going to be worth getting a babysitter to see in the theaters. This is such a inpisring quote and it was in the questions response, As George Santayana said, "Those who do not study history are condemned to repeat it".

"A Synopsis of Pope Joan: As its title reveals, the novel is based on the life of one of the most fascinating, extraordinary women in Western history--Pope Joan, a controversial figure of historical record who, disguised as a man, rose to rule Christianity in the 9Th century as the first and only woman to sit on the throne of St. Peter.
Brilliant and talented, young Joan rebels against the medieval social strictures forbidding women to learn to read and write. When her older brother is killed during a Viking attack, Joan takes up his cloak and identity, goes to the monastery of Fulda, and is initiated into the brotherhood in his place. As Brother John Anglicus, Joan distinguishes herself as a great Christian scholar. Eventually she is drawn to Rome, where she becomes enmeshed in a dangerous web of love, passion, and politics. Triumphing over appalling odds, she finally attains the highest throne in Christendom.
Pope Joan is a sweeping historical drama set against the turbulent events of the 9Th century -- the Saracen sack of St. Peter's, the famous fire in the Borgo that destroyed over three-quarters of the Vatican, the Battle of Fontenoy, arguably the bloodiest and most terrible of medieval conflicts. The novel is a fascinating vivid record of what life was really like during the so-called Dark Ages, as masterwork of suspense and passion that has as its center an unforgettable woman, reminiscent of Jean Auel's Ayla, Jane Austen's Emma, and other heroines who struggle against restrictions their souls will not accept."