Sundays Art: What makes a painting a Pre-Raphaelite?

The guide lines of what constitutes a painting to be regarded as a Pre-Raphaelite is a tricky subject and everyone has their own opinion. In researching this I have noticed one common trend, the trend being that everyone has their own idea of the guidelines and which artists fall under that guideline. I am sticking to what the National Museums Liverpool has listed. I have to believe that if not all, then most of the Pre-Raphaelites have a literary work that accompanies the piece because the inspiration usually comes from a great literary work.

"Toward the middle of the 19th century, a small group of young artists in England reacted vigorously against what they felt was "the frivolous art of the day": this reaction became known as the Pre-Raphaelite movement. Their ambition was to bring English art (such as it was) back to a greater truth to nature. They deeply admired the simplicities of the early 15th century, and they felt this admiration made them a brotherhood". 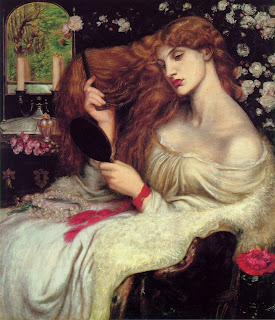 If the piece has these guide lines then you can bet that it is a Pre-Raphaelite. I do hope that this post will clear up some of the confusion that surrounds these wonderful Pre-Raphaelites. They are very unique in the fact that what you see is not always what you get never take them at face value. There are always deeper meanings in these pieces and I enjoy trying to figure them out. They are like art history puzzles and you never know what you are going to get.