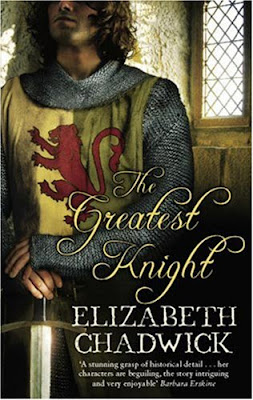 The greatest knight indeed, that William Marshall is by far one of the hunkiest men ever written about, besides Robert Dudley. I do not know what I can say that has not already been said about him. Yes Elizabeth Chadwick breathes life into historical fiction. She even takes it a step farther and makes it more than that. As a reader it is like being Alice in Wonderland and falling down a rabbit hole finding your self transported to another place and time. I became immersed in William’s time and it is proof that history is still hot. "The Greatest Knight" is a prime example that history is still sexy even today.

Set during the tumultuous Elenore of Aquitaine days in England. William is set to carve his story into history. Being a “newbie” to this period I found this sometimes-intimidating period easy to follow through heartthrob William. At heart he was Elenore’s man but he also became my new man. He gave chivalry a new meaning to me right along with loyalty. Prior to this read I did not know that when a knight swore loyalty it was for life only to be broken by death.

William’s story of the middle son with a terrifying childhood story of almost getting hung by his giblets at five years old by King Stephen was just his first lesson in loyalty to the King. Going on to fight his own way into the tourneys he found great success. What was it about William that was so enticing, was it is benevolent personality and impeccably noble character? I believe it was a combination of the mix along with a few other honorable traits including singing and sewing. A romantic you could say but still a realist.

In an era like this it can be down right confusing as The War of the Roses. This family feud that started between a husband and wife led to their children against each other and against their parents. How did William fit into this battlefront, he became the queens man and swore his loyalty to her eldest young son. They called him the “Young King” and he was brash but William had known him since he was a child. Together they roamed the tourney circuit like modern day movie stars. But even movie stars fall from grace; knights and Kings were no exception to the rule.

5/5++ add me to the pool of people that have been constantly buzzing about this book. The buzz is right, read it, just read it, there can not be once person who will not think William Marshall is one of the hottest HF men ever written about after this read. It is worth all the attention and I must read more and follow up with “The Scarlet Lion”. I can finally say I read one of Chadwick’s book and now I can add a new author to my list of great historical fiction writers.

Be sure and click on the image above to go to the Historical Fiction Bloggers Round Table website to enter the giveaway for your chance to win a copy of the "The Greatest Knight" and "The Scarlet Lion". I know WOW a chance to win both copies that is amazing, so just go you know you want to!