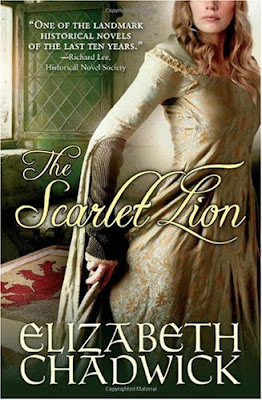 I really went into this read with an oblivious perception. I have no prior knowledge of King John Except what I have read in “The Greatest Knight” but in that he was still Prince John. I loved “The Greatest Knight” and that follows William on his younger exploits. Starting with him as a young squire nicknamed “guzzle guts” and then in his later crusade years to Jerusalem. Yet even later in his middle age when he meets the divine Isabelle.

“The Scarlet Lion” can be a stand-alone novel and I originally set out with “The Scarlet Lion” first. To be completely honest I got to page sixty and just knew I was missing the full value of William Marshall’s hotness. I NEVER do this but I dropped everything and went to the closest bookstore, which happened to be a “Barnes and Noble”, and bought myself a brand new copy of “The Greatest Knight”. I am so glad I did, my instinct told me I was getting the glory years first and I had to go back. I was on the PBS (paper back swap) list for “The Greatest Knight” my spot in line was in the two hundred plus range. The PBS wish list was at a large three hundred plus people waiting to get their wish granted for this one book. For more on “The Greatest Knight” check out my review here.

“The Scarlet Lion” picks up right where “The Greatest Knight” ended. Thank goodness too because I did not want to miss a single one part about William. At times in this read I found it different from "The Greatest Knight" in the fact that it seemed like it was more of a dual prospective on things that were going on. It was William and Isabelle’s stories combined that made for excellent reading. Trailing William in his days of service to King Richard all the way to his later years of service to Richard's little brother who became King John. I loved how the different prospective played off on each other. I enjoyed the divided of locations and events when the couple were not together, it enabled a 360 degree prospect.

Playing like in reality, William away at court serving the King John was in the dark about what Isabelle was going through and it was the same for Isabelle too at times. She would be in the dark about his adventures until he showed up at the home front. This read really surprised me every time I though I knew what was going to happen it completely took a different turn.


Isabelle to William:
“My father had no ear for music and it was one of his worst sins in her (Aoife, Isabelle’s mother) eyes. He said it all sounded like cats mating in a cauldron”.

How far can a man's honor be stretched? This is the question that must have been going through William’s mind during the whole time. After years of dedicated service to the royal family one person in the family had grown quite green with envy over William Marshall’s rise to earldom. One person that was not to be taken lightly either, King John was bound and determined to break William pride and honorable standing in the world. Since John was of the devious type of personality it did not take long for William’s honest nature to become an issue between them. Honor bound William would not give in to John’s evil ploys.


William in thought about Baron Fulke FitzWarin’s Irish gaze hound:
“The beast had taken a fancy to William and kept trying to sleep on his feet, thereby threatening to crush all feeling from them. Now and again its front end snored and its rear end produced quieter contributions that were nevertheless impossible to ignore.

5/5 Loved it! What a wonderful author to start with in this time period. I could not have done better in my selection of which author I would read first when it comes to knights. Highly recommended reading for everyone because Chadwick has a gift for fully immersing you in the time. She enables you to live and breathe the life of her novels. I have now added Chadwick to my list of favorite authors. Thank you Source books for sending me this wonderful novel, I am so glad you did!