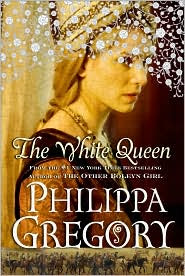 Talk about controversy. I found that this loosely based account of Elizabeth Woodville is defiantly going to stir the pot just like "The Other Boleyn Girl" did. I never thought I could become sympathetic to Elizabeth's plite but leave that to the professional Philippa Gregory to tackle that tremendous feat. History has always been written by the by the victor and Elizabeth was no victor in the the Counsins' War. Gregory employed a "fluffy" magical version of her that I enjoyed. In a drastic difference to other novels surrounding Elizabeth, I found I like this Elizabeth better. I found that she was not ambitious in the beginning, just seeking love, and a place to call her own.

Only when her love ones began to fall did she become a scorned woman seeking revenge. Blood for blood, eye for an eye, would make the whole world blind. Had she really been that heartless ambitious queen of England that let her kin the "riverses" flood the whole of England? Or was it a love of a family?

I had not anticipated the full aspect of the the "mystic" or "witchcraft" that surrounded her. Since it was always hinted at before in other reads but never really explored. Being that she was a descendant of Melusina, the water goddess she had the sight and knew things before they happened. Maybe it was just a strong intuition. Elizabeth had put it as "my wishes come true". Her wish was to protect her and her kins interest. I also being from a large family can understand that she would want all of them taken care of. She alienated the court in helping her family soak up every opportunity at court, like a sponge to water. She did what she wanted and was sometimes spiteful towards others. In this novel I was able to see her motives and feel empathy towards her. In speaking of Margaret of Anjou, Elizabeth herself already knew what it meant to be a Queen of England during The Cousins' War. "She will never stop until her husband is dead, and her son is dead, and she has no one left to put on the throne".

Elizabeth played the caring, attentive mother and her loving , devoted husband had her pregnant almost the whole marriage. I like that Edward was played in a softer role too, not focusing too much on his womanizing and drinking problems. It was only later that he showed his true colors in his directions to his brother in law Anthony on surveying the upcoming battle: "And I' am much attached to my cock, brother. Make sure your sister can put another prince in the cradle",..."save my balls for her, Anthony"!

In bringing to light Anthony I just have to sate that I was amazed at how much I enjoyed the sibling relationship between the two, Elizabeth and Anthony. The bond had never crossed my mind. Even if his role of the novel was way more out there, which it was, I still enjoyed that he was loyal and loved his sister deeply. Sharing a special bond, like me and my own brother.

The war of the roses was a blood bath between cousins spanning generations. An eye for an eye , which almost made all of England blind. Elizabeth was a key influence in the York household during the war. Had Elizabeth lost her princes, as she called the oldest "baby", would a mother know deep in her bones if her sons had died? Or would she and her left loved ones pay the consequences of the now brewing Tudor curse?

I have to say I loved this but I felt a little tripped up waiting for character discrepancy's to clear up. I guess this is one of those reads where too much knowledge can hurt the story line. But hey one of my favorite parts of a finished read is researching the web to compare known fact with fiction. Gregory did a wonderful job in painting a a beautiful first novel in the series The cousins' War, which I truly did enjoy. I can not wait for the next one which is suppose to be Margaret Beaufort, the red rose and after that it is Elizabeth of York. I defiantly recommend this to a lover of fantasy who is thinking about crossing over into historical fiction.

Since today is the big Release day for the White Queen I thought you all would like some extras.