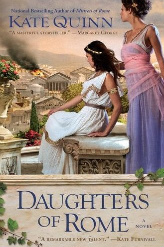 "A.D. 69. The Roman Empire is up for the taking. The Year of Four Emperors will change everything-especially the lives of two sisters with a very personal stake in the outcome. Elegant and ambitious, Cornelia embodies the essence of the perfect Roman wife. She lives to one day see her loyal husband as Emperor. Her sister Marcella is more aloof, content to witness history rather than make it. But when a bloody coup turns their world upside-down, both women must maneuver carefully just to stay alive. As Cornelia tries to pick up the pieces of her shattered dreams, Marcella discovers a hidden talent for influencing the most powerful men in Rome. In the end, though, there can only be one Emperor...and one Empress".

released last year and on April 5th "Daughters of Rome

" hit book stores everywhere.  Kate visited last year for Mistress of Rome with "Historically Obsessed with fashion". Now lets see what Kate has in store for us this time.

Historical fiction novelists already have a hard time with diets because delicious food is constantly cropping up in the books we write. Set a book in the Middle Ages and soon you're drooling over sugar subtleties and spit-roasted boar. Writing about the Restoration period? Prepare to go on a Ben & Jerry's binge after detailing all the newly invented ice creams Charles II and his various mistresses went wild over. Or you could be very unlucky, like me, and write about ancient Rome: probably the most gastronomically inventive culture the world has ever produced. As if that weren't bad enough, Daughters of Rome happens to take place during the Year of Four Emperors – and the third of those four emperors was Vitellius, a walking stomach who was only on the throne about six months but spent most of that time eating literally the best food in the world.

It was torture. I choked down my dry crackers and calorie-free miso soup as my heroines dined on roast sparrows in spicy egg sauce and sausages with damsons and pomegranate seeds. I gave up dessert, but my heroines went to Imperial banquets and ate jellied roses in pastry. And wine – everyone in my book swilled goblet after filigreed silver goblet of wine (Romans drank little else) while I sipped grimly at my diet green tea.

Of course, not everything about Roman cuisine would please a 21st century eye. I for one am glad never to have been served an entire elephant trunk at a party. And when I read about one particularly famous Roman dish where a live fish was brought to the table still alive so the guests could watch it turn a pretty color as it died in a pool of lamprey milk sauce – all I could think was that I prefer my food to be dead by the time it reaches my plate, thank you. And if you're wondering how anybody managed to eat all those dishes at a 100 course banquet . . . well, legendary gourmets like Emperor Vitellius made use of a little room called a vomitorium after fifty courses or so, returned with an empty stomach, and kept right on eating through another fifty courses. (Bulimia: the Roman way.)

Still, Roman banquets were usually pleasant things, and you could do worse than to try hosting one the next time you're in an ambitious mood. Be sure to invite between three and nine guests (no less than the Three Graces, no more than the Nine Muses, according to a contemporary of Cicero in his instructions for the perfect dinner party), and seat everyone on a horseshoe arrangement of couches so they can recline on the left elbow while eating. You must provide entertainment, and remember that Greek orators are always appropriate and naked dancing girls always tacky. And here's a sample menu for your pre-dinner shopping trip:

DESSERT
Hot African sweet-wine cakes with honey
Fricassee of roses with pastry
Dates stuffed with pine nuts and fried in honey
One more thing: can you please invite me to your Roman banquet? My diet of green tea and miso soup has for the most part paid off (despite a leetle lapse with a Roman-style oyster ragout) and I have now been cleared to eat all the stuffed dormice I want.

Lizzy, thanks for having me back this year! It’s been a pleasure.

Thank you Kate for the very enticing post. I could not imagine eating so many different things in one meal. Giveaway! Up for grabs is one brand new copy of Daughters of Rome

by Kate Quinn. Open to US and Canada only. The ONLY rule is you MUST fill out the form below.