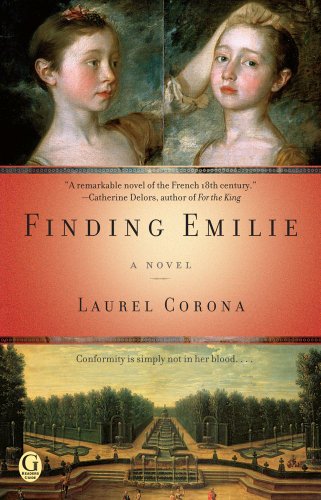 "Woman is born free, and everywhere she is in corsets. . . .
Lili du Châtelet yearns to know more about her mother, the brilliant French mathematician Emilie. But the shrouded details of Emilie’s unconventional life—and her sudden death—are elusive. Caught between the confines of a convent upbringing and the intrigues of the Versailles court, Lili blossoms under the care of a Parisian salonnière as she absorbs the excitement of the Enlightenment, even as the scandalous shadow of her mother’s past haunts her and puts her on her own path of self-discovery.
Laurel Corona’s breathtaking new novel, set on the eve of the French Revolution, vividly illuminates the tensions of the times, and the dangerous dance between the need to conform and the desire to chart one’s own destiny and journey of the heart".

Please give a warm welcome to author Laurel Corona...

FINDING EMILIE
LAUREL CORONA
THE ADVENTURES OF MEADOWLARK AND TOM

Around a hundred pages into the first draft of FINDING EMILIE, I realized I had a dilemma. Although the two main characters, Lili and Delphine, aristocratic school girls in eighteenth-century Paris, were funny, imaginative, and full of life, when I envisioned the future I would have to write for them, I got depressed thinking about it.

It’s not just that they would have to wear corsets, panniers, and wigs a mile high, although that to me would be bad enough! It was more the expectations--absurdly high about things that don’t really matter, and humiliatingly low for those that do.

How draining it must have been for women to realize that the most valuable learning they were expected to master, other than church catechism, was the precise kind of nod appropriate for Monsieur So-and-so, and the exact depth and length of curtsey for the Countess of This-and-That. How dreary to accept that the frequent subject of gossip at court was some poor soul’s failure to be humorous, graceful, witty, charming in exactly the right measure at the moment.

“What have I gotten Lili and Delphine into?” I asked myself, but really I was wondering what I had ahead for myself. My novels are optimistic in tone and positive in sentiment, and the protagonists are psychologically healthy females who manage to thrive despite the limitations of their era. The focus is on the inner conflict that comes from having to figure out when to take a stand, where to choose to make life more difficult to have it be more fulfilling, how to find and be yourself when everything conspires to mold you into someone else. How was I going to keep sunshine in this novel as the situation grew more gloomy?

The answer came to me in a figment of Lili’s imagination, a scrappy little girl named Meadowlark. A lover of fairy tales, early in the novel, Lili tries writing a story herself, but what comes out is not an imperiled princess, but an alter-ego, a little girl who escapes her dreary life on a magic horse named Comète and meets an adventurous boy named Tom, with whom she roams earth and the heavens in search of adventure.

These stories became a way for Lili to explore her fears and frustrations. She may not know that’s what she’s doing, but the reader will. As Lili matures, her stories become more pointed and less swashbuckling, until by the end she is writing mature satire in the vein of Gulliver’s Travels and Candide.

And what better way to acknowledge that Lili’s era is when social satire first emerged as a powerful literary form, taking on the serious issues of the day with delicious humor? What better way to pay tribute to Voltaire, Emilie du Chatelet’s real-life soul mate?
Meadowlark becomes a means for Lili to comprehend her world and preserve her sense of self as she navigates the court at Versailles and faces the future of a loveless marriage and a life that will squeeze her more mercilessly than a stomacher or corset. The stories give her a chance to breathe, to give voice to herself.

And I think they’re hilarious! In Kiev we learn about the Court of Good Choices, in China we see a man make the social gaffe of writing a poem to the woman he loves, in rural France we watch a girl get her brains scrambled so she can become a good wife, in Uruguay, we meet a rich family tied up in golden chains to prove they don’t have to work for a living, and in the Brazilian rainforest, we witness some pointed realizations about happiness.

The tales of Meadowlark and Tom are an important part of Lili’s story, so I was disappointed when the editor expressed concern that they took the reader away from the main narrative. Since the reader is temporarily distracted by the vignettes from the life of Emilie du Chatelet, Lili’s dead mother, which appear between chapters, and by a smattering of letters that tell part of the story, the editor felt that one more diversion was too much. The decision we reached was to use only snippets from the Meadowlark tales in the novel and then present the complete versions as a separate little book bound in at the end.

I’m not the best judge of whether this worked. So many things require fresh eyes, which of course I don’t have. In the author’s note at the beginning, I tell readers what’s going on, but I have a feeling people won’t go to the end and read the stories as Lili writes them (this would be best), and may not know the stories are there at all until they get to the end. I don’t know what the experience of reading them all as a group will be, but it isn’t what I intended. But things are what they are, and I am hopeful these stories will both complement the novel, and perhaps have a life of their own someday. I’d really like to jump back on Comète and continue to see the world through Meadowlark’s eyes!

I am down to the wire on "Finding Emilie

" and will just have to wait and see how it plays out for me in the end. Thank you Laurel for getting us up to speed on Meadow Lark and Tom's portion of the novel.