HFRT is featuring author Christy English this month and for more on the event you can check out the group page or the calender of events. I can not wait to post my review of Christy's latest release "To Be Queen: A Novel of the Early Life of Eleanor of Aquitaine"

but that will have to wait a little bit more but in the mean time if you want to you can check out my review of Christy's previous release "The Queen's Pawn". Now it is time to give a warm welcome to author Christy English who has graciously written a guest post on the lady we are all dying to learn more about Eleanor of Aquitaine. You can also click on the "To Be Queen" cover art on the side bar and follow the link to the now running giveaway for your chance to win a copy of Christy's wonderful novel.

Eleanor of Aquitaine and The Court of Love
Guest Post by Christy English, Author of
To Be Queen: A Novel of the Early Life of Eleanor of Aquitaine
The Court of Love was begun in Aquitaine by Eleanor’s grandfather, William IX, the troubadour duke. A great lover of ladies, he had three wives and countless mistresses, and to seduce them all, he wrote love poetry and set that poetry to music. A few of his poems and songs survive, some written to muse on God, others a rapture to Love. Though the language of troubadour poetry is flowery, no doubt the good duke’s goal was the same as that of many men: to seduce a woman, or women, into his bed.

William IX, Duke of Aquitaine
Eleanor’s Grandfather
William IX was a notorious or a romantic figure, depending on who you asked at the time. He kidnapped his third wife, Eleanor’s grandmother, away from her rightful husband so that she might leave all behind and marry him. It was a happy marriage from all accounts, and both William X and Raymond, later Prince of Antioch, were products of that union. The rounded tower, the Maubergeon Tower, shown in this photograph of the Palace at Poitiers, was built by William IX for his new bride, Dangerousa.

The Palace at Poitiers
View of the Tower Built by William IX for His Third Wife, Dangeousa
Eleanor’s Grandmother
Though her grandfather was very successful in establishing the Court of Love in Aquitaine and Poitiers, it was Eleanor and later her favorite son, Richard the Lionheart, who kept the tradition alive. Eleanor transformed the court of love to suit her needs as duchess. She rose to rule her barons and fighting men at the very young age of fifteen, and as she was unable to lead them into battle herself, she had to compel them to fight for her for other reasons. Love is one of the best.
Of course, courtly love is not romantic love as we understand it today. The men who vied for and pined after the love of their lady never expected this love to be fulfilled. Unlike the Court of Love under Duke William IX, who did indeed expect women to fall to his songs and to his charms, Eleanor lived her life untouched and untouchable, the Lady for whom all men were dying of love, but who no man could approach. Eleanor changed the Art of Courtly Love to mean that all men loved her from afar, all men might sing for her, write poetry to her, and most importantly, fight her wars for her. For a woman ruling in a time when men would simply bash another’s head in to take what they wanted, she had to use every advantage she had to keep her fighting men in line. The Court of Love was simply one tool in Eleanor of Aquitaine’s arsenal, but it served her well all her life. 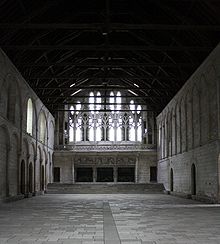 The Great Hall in Eleanor’s Palace at Poitiers
Where Eleanor’s Troubadours Sang of Her Beauty
Eleanor’s first daughter by Louis VII of France, Marie of Champagne, continued the Court of Love in her husband’s domains. She sponsored many famous troubadours, among them Chretien de Troyes and Andreus Capellanus, who wrote The Art of Courtly Love.
Eleanor’s influence on the Court of Love is far reaching. Even today the chivalric notion of a knight fighting for his lady fair is a common theme. The idea of courtly love is just one more way Eleanor’s influence still lives on.

Lizzy, thank you so much for hosting me today. TO BE QUEEN: A NOVEL OF THE EARLY LIFE OF ELEANOR OF AQUITAINE is available for pre-order and will be in bookstores on April 5.
Amazon. For those who want to know more about Eleanor’s adventures, please find me on my blog at http://www.ChristyEnglish.com , on Twitter and on Facebook

Thank you Christy for the enticing post on Eleanor and her court of love. I especially enjoyed the pictures since it visually gives me an idea of where she lived. I can just see her now in her hall listening to the swoony songs of love.