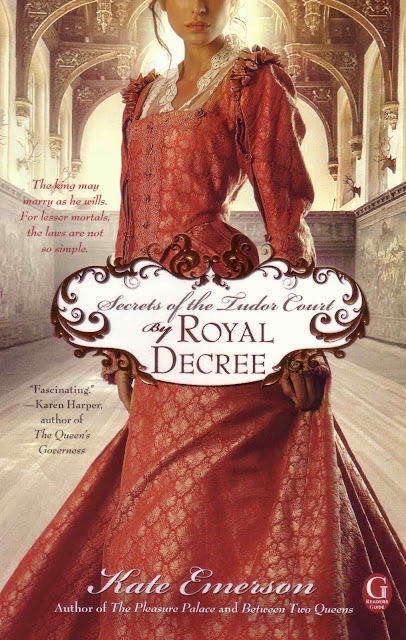 OMG am so excited! I can not wait for this book to be released I have been on pins and needles waiting. I can say finally we have the final proof of the cover art for "By Royal Decree" which is due to hit bookstores everywhere December 14th 2010 . Is it not to die for? I just love her covers it is how I got hooked into them with the first release of Pleasure Palace. This is what Kathy had to share with us on the upcoming release: 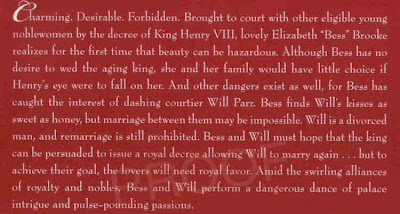 (if you can not read this click the image to go to the larger version)
From Kathy's site check out her bio on her new leading lady Elizabeth Brooke:

"Below is the mini-biography of the real Elizabeth Brooke, from my Who's Who of Tudor Women (written as Kathy Lynn Emerson). By Royal Decree covers the period of her life from 1542-1558".
The juiciest bit of info that Kathy had to share was on her work in progress which is now moving from the research into the writing stage. It will be titled "AT THE KING'S PLEASURE" it features Anne Stafford, Lady Hastings (later Countess of Huntingdon) and the four men in her life---her brother, the Duke of Buckingham; her husband, George Hastings; her lover, Sir William Compton (who also appears in THE PLEASURE PALACE); and, of course, Henry VIII.
"AT THE KING'S PLEASURE (Anne Stafford's story) will cover the period from Anne's marriage to George Hastings in December 1509 through the aftermath of her brother's execution in 1521. This one is probably not going to be out until early 2012".
I beyond thrilled when I received this bit of information from Kathy. The Duke of Buckingham has always been one of my must read about characters eventually. I guess Kate's book will just have to be my first on him. Thank you Kathy for sharing we all appreciate the update and really look forward to the new release of "By Royal Decree".