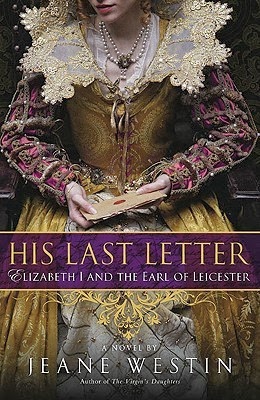 This is the first review I have had the pleasure of posting a review on release day, it is cool it just happened that way. "His Last Letter" by Jeane Westin is in bookstores today. I am telling you this books cover is beautiful in person and it  would be a lovely addition to any HF lovers library.

Robert Dudley’s last letter he wrote to his Queen Elizabeth I has always captivated me. The letter was discovered after Elizabeth passed away. She had kept it in a keepsake box and had written on the outside of it “his last letter”. A treasure from the man I view as the only true love of Elizabeth’s lifetime. It has have been some time since I have read anything focusing on Elizabeth because I have been a bit burnt out on her lately. “His Last Letter” was just too irresistible for me to pass up. Jeane Westin skated from memory to memory of Robert and Elizabeth’s life of turmoil, love, and war. Giving the reader one of the best portraits of Robert and Queen Elizabeth’s complicated relationship.

Now as all of you know Robert Dudley was Queen Elizabeth I long time favorite, he passed away sometime before Elizabeth I. I loved Westin’s approach; she wisely keeps the story exclusive to the love between the two. Not at one time did it go beyond that and thank goodness because their love is my favorite aspect of Elizabeth’s life.

Westin sets the opening act on the eve of Elizabeth's victory celebration of defeating the Spanish armada. Elizabeth starts to wonder were her long time favorite Robert Dudley is. She knew after the victory he was unwell and had him take to the waters at Cornbury for a speedy recovery. When she demanded to know where he was, she received a letter from him that would change her forever. The color in Elizabeth’s whole world disolved away when she was told the devastating news that her “eyes” would not be returning to her. Robert was dead and the world froze. Her only real love was gone.  Elizabeth Locked herself alone in her room and would admit no one.

My favorite aspect of this book is it is limited to the cream of crop moments that are monumental events in their relationship. Reliving the memories as Elizabeth saw them all the good, the bad, and all the unspoken. Each chapter was a new time period and a change of location, weaving in and out of different memories. The best moments, all of my favorite moments were there, the tower, the coronation, the beheading of Mary, and the victory over Spain.

5/5 To be honest it was really good and very well written I think I just need to steer clear of Elizabeth for a bit more unless it is like this one. I did love it because I completely love Robert Dudley, this was the pair at their best. I gave it a five because it was a unique prospective on the details behind Robert Dudley’s last letter to Elizabeth. The read was a flood of emotions I felt through out Elizabeth’s memories and it made the ending such a twist that I never saw anything coming. This read is a lovely recommended romance and lenient HF lovers. Westin did take liberties but they were not line crossing to me and were most pleasurable.

R-Rating, sexual references
FTC-Book was sent to be by publisher