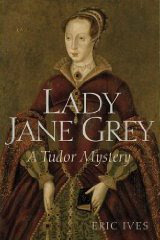 I would love a good read about Lady Jane Grey. The poor girl never even wanted to be Queen. I will be checking in on this one when it hits the shelves.