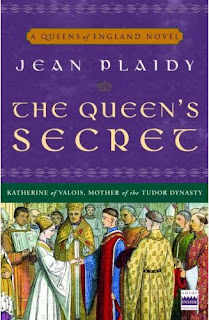 Grandmother of the Tudor dynasty. Katherine of Valois grew up with a mentally unstable father and a lusty sinful mother who did nothing to help her husband or children though hard times. She was a terrible evil woman. Katherine never knowing a mothers love was seeking stability in any form. It is only logical to me that she married "the conquer" of her fathers own land, desperate to escape the strife of France and her mothers ill fated choices. She was not a ambitious woman because she saw first hand what it means to be a king, and how much of a burden it could easily become. Life had not kind to her father or her brothers, they paid a high price for being the blood royal.

When Katherine went to England she devoted herself fully to her husband the warrior king. Sadly within two years her blessed son was born, whom she loved very deeply, and her husband was dead and buried. Leaving her all alone in England. Katherine's childhood affected her deeply. Much more than she ever let on to. She never expected anything in life, especially not true love. I do not even think she knew what unconditional love was until she met Owen Tudor the welsh soldier who had served her late husband the king. She found comfort with Owen when her sweet son was taken from her as a little child "to be raised by the high born English nobles, who knew how to raise a child by a kings standards". Withering under the strain of loosing her son she begins to blossom with love for Owen. They say we never choose love it finds us and this is the case with Katherine.

She did not choose to fall in love with him. Life has a way of finding it's own path. When the path became visible she went for it. Knowing that she was putting herself in harms way of her brother in laws. She still sought her happiness, and the consequences would put her into dire straights.

4/5 muses because this book was very depressing to me, she never had a fighting chance. I wanted her to be happy but did she even know what that was? They say blood is thicker than water, I think it is family who can hurt you the most because people are sensitive to the bonds of family members and vulnerable to them. Katherine knew this and decided to go for her chance to live a quite life in the country away from it all. Knowing all well it could be her downfall. I enjoyed the book for the fact that it gave insight to the battles between France and England, and why the French hated the English so much for many generations to come. It also made me understand what led up to the war of the roses, and why having a child king was so hard for England and why he was mentally unstable in his later years. A worthy read, even though it was heartbreaking it was very insightful.

"Katherine of Valois was born a princess, the daughter of King Charles VI of France. But by the time Katherine was old enough to know him, her father had come to be called “Charles the Mad,” given to unpredictable fits of insanity. The young princess lived a secluded life, awaiting her father’s sane moments and suffering through the mad ones, as her mother took up with her uncle and their futures became more and more uncertain. Katherine’s fortunes appeared to be changing when, at nineteen, she was married to King Henry V of England. Within two years, she gave birth to an heir—but her happiness was fleeting. Soon after the birth of her son, she lost her husband to an illness.

With Joan of Arc inciting the French to overthrow English rule, Katherine’s loyalty to her adopted homeland of England became a matter of intense suspicion. Katherine had brought her dowry and borne her heir; what use was she to England? It was decreed that she would live out her remaining years alone, far from the seat of power. But no one, not even Katherine herself, could have anticipated that she would fall in love with and secretly marry one of her guardians, Owen Tudor—or that a generation later, their grandson would become the first king of the great Tudor dynasty."