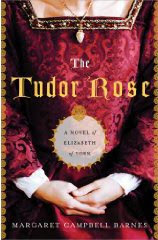 October 1st 2009 Paperback
Elizabeth of York, my favorite woman who was the only to be daughter, sister, wife to the crown. One of the greatest mysteries in history her lost brothers the "princes in the tower". One of my absolute favorite time periods, nearing the end of the war of the roses, Henry VII coming to the crown, and of course my favorite Henry VIII as a child. This has potiental to be a good read.
The Tudor Rose: The Story of the Queen Who United a Kingdom and Birthed a Dynasty
"One woman holds the key to England's most glorious empire in this intimate retelling of the launch of the Tudor dynasty
A magnificent portrait of Elizabeth of York, set against the dramatic background of fifteenth 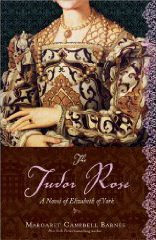 century England. Elizabeth, the only living descendant of Edward IV, has the most valuable possession in all of England—a legitimate claim to the crown. Two princes battle to win Britain's most rightful heiress for a bride and her kingdom for his own. On one side is her uncle Richard, the last Plantagenet King, whom she fears is the murderer of her two brothers, the would-be kings. On the other side is Henry Tudor, the exiled knight. Can he save her from a horrifying marriage to a cut-throat soldier?
Thrust into the intrigue and drama of the War of the Roses, Elizabeth has a country within her grasp—if she can find the strength to unite a kingdom torn apart by a thirst for power. A richly drawn tale of the woman who launched one of the most dramatic dynasties England has ever seen, The Tudor Rose is a vibrant, imaginative look at the power of a queen."