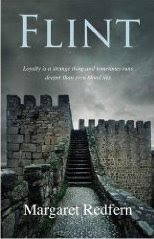 Flint a short read at less than two hundred pages was anything but an easy read in the beginning. A enticingly challenging tale of two deeply bonded brothers named Will and Ned. The first challenge was the dialect of the story: Welsh, at times it was hard for me to follow. I had noticed that around page thirty the story took a turn and I became fully immersed in Ned and Will's trials. The final part I struggled with was each section had a symbol: a swan, cross, shovel, and boat. I had figured that the cross was the narrator, which I presume is Will. The swan was Will throughout the tale. The shovel I am not positive is Ned. The others I could not figure out and it bothersome. Now that is out of the way we can get to the good points.

The favorable points of the book was the relationship between the brothers. The unconditional love between them was moving. Will was the younger brother being about ten, Ned the older in his early teens. Ned was a mute, not really being able to speak except to Will in a special way. Will had all his life taken to looking out for his big brother, which made him exceptionally feisty. Ned reminded me of what we would view as highly intelligent, a savant for music, a whisperer to animals and nature itself. He spent most of his tale being a aloof wanderer, Wills feelings and emotions being more than enough for insight. I think Ned was curious and that would lead to wandering. The brothers wandering beginning is them being commandeered into King Edwards army and marched from their comfortable safe homes in the Fens.

The army was called upon to build the kings new castle. Once in North Wales they went to Flint to start the foundation and dig out the moat. King Edward had ordered them to work, they had no choice, and no where to run to, so they made the best out of the situation. All that mattered was they had each other. Things became cloudy and stormy once the work began, and many suffered. I had to remind myself of what year this was to have taken place, no real convinces. England was was a dark and brutal place under King Edward "Longshanks rein. They called him the "leopard"who attacks it's kill and feasts on its victims still living flesh. During the time at Flint they had learned many brutal life lessons, experiencing many daily trials was the norm. While the men were forced into back breaking labor, their fellow people from the Fens were suffering. Ned being of the mind he was had knowledge of herbs potions and plants. He would use them to help his comrades. When they suffered they began to seek comfort.

Ned was keen to his surroundings, given that any opportunity would arise, he would not hesitate to pounce on it. Which is how he was able to get permission to go to the sacred well of holy water. They were allowed there once but Ned had the taste in his mouth and could not leave it alone. It was famous for its healing powers and he needed more to help his comrades. Ned would end up sneaking off with Will in the dark of night in pursuit of more holy water. Sneaking off would cause ripples of consequences like a pebble does as it is dropped into the water for them both of them.

Ned was always looking for something or was it trouble, or that he was so smart he saw life in a different light. A higher level of understanding is what he craved. Their surroundings changed, people changed, died or ran off, but the brothers stood strong in their love and used it as armor to protect them selves at times. Holding fast to each other making it through the aversion of Flint only to be on the run for their lives. Running from the "bull" that struck sheer terror deep in their hearts. Would the brothers find their way or is that not the right way I wondered.

I enjoyed Flint even if it had a slow start. The unexpected twist ending made up for everything that Will and Ned survived through. I would personally like to challenge anyone interested in Flint to give it a go and see if you can figure out who the shovel and boat are. It also gave me a deeper point of view of how many people suffered building for the king. People forget about the little guys who have to work for everything in an unforgiving environment. It was refreshing from a different point of view. Another wonderful feature of this book is that it is published by Honno books. Honno is a welsh women's press group who help welsh women publish their books. Which get kudos in my book.

"Two brothers, Will and Ned, are on the long march from the Fens to North Wales, commandeered into the army of ditch-diggers heading west towards Flint, to prepare the ground for the foundations of Edward I’s new castle. The English overseers are suspicious of the brothers, for not only is Ned a mute, herbalist and horse-whisperer, but they have been close to the enemy - Ned had been secretly taking lessons in music from an exiled Welsh bard before the ‘recruiters’ came. The boys find themselves besieged on all sides - a long way from home, unsure of their own allegiances, and in grave danger of being thought traitors to the King. Margaret Redfern Margaret Redfern started wandering as soon as she could walk. She was born in Yorkshire and has lived in Dorset, Lancashire, Lincolnshire and Turkey, and is now settled in Pembroke. She has been involved in education most of her working life but has also pulled peas, skivvied in restaurant kitchens, worked with the Wildlife Trust and as a journalist".