Sundays Art: Signora Da Vinci, The Woman in The Veil by Raphael 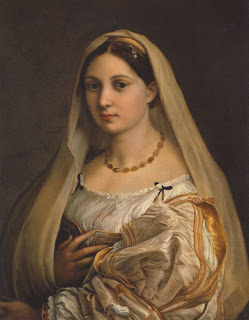 I am quivering with excitement! Today in my local Oregonian paper I found an article stating that the Portland Art Museum will have Raphael's: The Woman with a Veil on loan from Italy and it will be on display from October 24, 2009 - January 3, 2010. This is a once in a life time opportunity that I will not miss!

"This October, the Portland Art Museum will present a once-in-a-lifetime opportunity to view Raphael's renowned painting The Woman with a Veil. This single-painting exhibition will bring one of the most important paintings of the Renaissance to Oregon for the first time.

The Woman with a Veil (la velata or la donna velata) was painted in 1516 and depicts a serene woman looking intently at the viewer. It is believed that the model for the painting is the same woman depicted in other Raphael works including La Fornarina. Scholars have suggested that the woman was Raphael’s lover, Margherita Luti."

The painting also brings to light quite possibly my most favorite book: "Signora Da Vinci" by Robin Maxwell. The woman in the veil just so happens to be the cover for Maxwell's novel. If you love historical fiction and have not read it you are completely missing out. Two days is all it took once I got a hold of it, it was like I inhaled the book rather than read it.

"I was fifteen years old in 1452 when I bore a bastard child in the tiny village of Vinci. His name was Leonardo, and he was destined to change the world forever.

I suffered much cruelty as an unmarried mother, and had no recourse when they took my boy away from me. I had no rights, no prospects, no future. Everyone believed I was ruined. But no one knew the secrets of my own childhood, nor could they ever have imagined the dangerous and heretical scheme I would devise to protect and watch over my remarkable son as he grew into manhood. Some might call me a liar, since all I describe would be impossible for a woman of my station. But that is where my design unfolds, and I am finally ready to reveal it.

They call me Caterina. And this is my story."