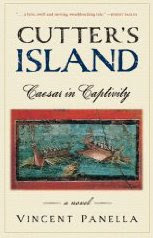 This one has the wheels turning in my mind. Dreams of Caesar as a young man. I love ancient roman history, and this one might give some insight into his early years. Who was he before he became the Julius Caesar of Shakespeare? Yes, I have read Shakespeare's Julius Caesar. I remember being in junior high and everyone in my classes whining about having to study Shakespeare. While I secretly stole away to the library to read more about Caesar and Shakespeare. I will be reading this one and doing a review also, as soon as I get my hands on it. I am looking forward to it!

"Most of us are familiar with the Caesar of Shakespeare and Shaw. We know him primarily as the manipulative warlord and statesman. But what about the Caesar of Plutarch and Suetonius - historians who dealt with Caesar as a young man? Here, in this stunning novel, written with all the excitement and eloquence of an epic poem, we find Caesar at the age of twenty-five captured by pirates as he sails to the Island of Rhodes to study rhetoric with the renowned Apollonias Moon. In an odd sort of way, Caesar finds, in the encounter with Cutter - the clever, bloodthirsty pirate and his band of assassins - a new strength of purpose, an unexpected vehicle for him to hone his tactical skills, something he must develop if he is to equal or surpass his contemporaries. After all, weren't Crassus and Pompey the Great already famous generals in their twenties? In eloquent and burnished prose, Vincent Panella has Caesar tell the story of his kidnapping and ransom and his solemn vow to avenge his forty days of captivity. It is a time when Caesar's self-doubt is at a peak: 'I don't know where I fit - am I really a man of dreams? Am I as strong as Sertorius...as brave a Pompey?' It is in Caesar's final encounter with the wily pirate and his men that he is challenged to become himself at last."