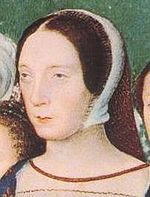 Claude's life was spent in an endless round of annual pregnancies. Which had to be hard on any woman's body. Her husband had many mistresses, but was usually relatively discreet. Claude imposed a strict moral code on her own household, which only a few chose to flout. Her husband was also Henry VIII arch enemy. They even competed in there womanizing skills. Once they even bare brawled. Henry lost and was pissed that he lost to François.

Email ThisBlogThis!Share to TwitterShare to FacebookShare to Pinterest
Labels: 16th Century, Claude of France, France, Francis I, today in history