Today In History, Wedding Bells for Queen Mary of Scots 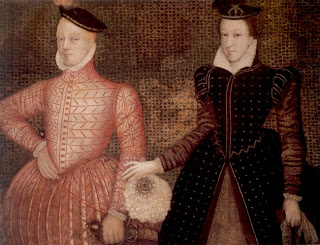 On July 29Th 1565 Queen Mary of Scots married Henry Stuart, Lord Darnely. He was also her half first cousin.

Mary had fallen head over heels in love with the "long lad" (Queen Elizabeth's words) after he had come to Scotland from England earlier in the year (with the permission of the English). On the other hand, Elizabeth felt threatened by the prospect of such a marriage, because both Mary and Darnley were claimants to the English throne, being direct descendants of Margaret Tudor, the elder sister of Henry VIII. Their children would inherit both parents' claims, and thus, be next in line for the English throne.

Palace. Before long, Darnley became arrogant and demanded power with his courtesy title of "King". Darnley was jealous of Mary's friendship with her private secretary, David Rizzio, and, in March 1566 Darnley entered into a secret conspiracy with the nobles who had rebelled against Mary. On 9 March a group of the lords, accompanied by Darnley, murdered Rizzio in front of the pregnant Mary while the two were in conference at Holyrood, Darnley changed sides again and betrayed the lords, but the murder had made the breakdown of their marriage inevitable.

One night in February 1567, after Mary had left to go to the wedding of one of her maids of honour, an explosion occurred in the house, and Darnley was found dead in the garden, apparently of strangulation.

That was just the beginning for Mary. Later she fled from Scotland to England for her own safety. She was held a prisoner by Queen Elizabeth I and eventually beheaded for treason.

Carolly Erickson's new release "The Memoirs of Mary Queen of Scots" is due to be released on September 1st 2009. I am so excited I can not wait to see how she plays out Mary's character.