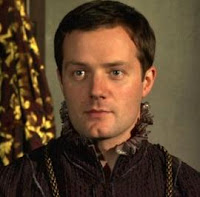 I really was not going to post this but C.W. Gortner has compelled me to do so because in truth George Boleyn is in my thoughts today. Most of this is a re-post from last year. I think George's story touches a soft spot in my heart because Like Anne Boleyn I too have a brother I am very close to. To me it seems some siblings are just siblings but some siblings share a extra special bond; one that just is a part of your soul. I think George and Anne had a relationship like that more than an incestuous one. Anne Boleyn called him her " sweet brother"

475 years ago today George Boleyn, Viscount Rochford was executed on Tower hill on May 17th 1536. He was brought to trail with four other men for having cardinal knowledge of the Queen of England. It just happened that the queen was his sister Anne Boleyn. During the hearing his own wife testified against him that conniving Jane Parker. George was found guilty of incest by the court judges, his own father insanely being one of them. Everyone had turned their back on him and Anne. No one dared speak out for fear of the kings Henry's wrath.

Poor George entangled in a web of deceit, known as the rat race but, in the court of Henry VIII it was a deadly game to play with very high stakes, your head. The higher they are raised, the harder they fall, this applies to George. He was a scape goat for king Henry, someone to blame for Queen Anne's terrible miscarriages & wild antics. George was a avid politician and henchman for Henry during his campaign urged by Anne, to the dissolution of the catholic monasteries. It was also rumored that he was gay, and one of the other men executed, a musician named Mark Smeaton could have been his lover. Mark is also accused of being the later Queen Elizabeth's father. It was a vicious slander on Anne set in place by the supporters of the catholic faith. In the end George met a terrible end, & when I watched him executed on Tudors on showtime, I cried for him and mark.


" I was a great reader and mighty debater of the word of God, and one of those who most favoured the gospel of Jesus Christ. Wherefore, lest the word of God should be brought into reproach on my account, I now tell you all Sirs, that if I had, in very deed, kept his holy word, even as I read and reasoned about it with all the strength of my wit, certain am I that I should not be in the piteous condition wherein I now stand. Truly and diligently did I read the gospel of Christ Jesus, but I turned not to profit that which I did read; the which had I done, of a surety I had not fallen into so great errors. Wherefore I do beseech you all, for the love of our Lord God, that ye do at all seasons, hold by the truth, and speak it, and embrace it; for beyond all peradventure, better profiteth he who readeth not and yet doeth well, than he who readeth much and yet liveth in sin"

It appears that the book was passed around the Boleyn circle. George seems to have passed it on to Mark Smeaton who added ‘A moi M. Marc S’ at the end of one page. Then the poet Thomas Wyatt owned it and he scribbled down proverbs in Latin, French, Spanish and Italian on the back flyleaves.George was deeply interested in religious texts and when abroad for various diplomatic reasons he purchased books for his sister Anne. Anne amassed a great number of religious books and greatly enhanced the royal library. The fact that both George and Smeaton had access to this book was used by historian Retha Warnicke as the sole piece of evidence to suggest the two men were involved in a homosexual relationship, whilst ignoring the fact that Wyatt had also endorsed the book. This seems to be a case of making the evidence fit the theory rather than the other way around".

by Philippa Gregory. Also with her follow up book The Boleyn Inheritance

you can follow the demise of George's wife Jane Parker other wise known as Jane Viscount Rochford. Jane played a major key role in George's down fall and later in Queen Catherine Howard's death also. My favorite Jane Rochford novel is Brandy Purdy's The Boleyn Wife

because it is wild and defiantly falls under "historical entertainment". Brandy focuses on the crazy side of Jane and she EVEN gives a very logical explanation of where that famous Boleyn necklace went. But that is a whole different story for another time. I wish it were different but there is no existing or surviving portrait of George Boleyn. I imagine that he was handsome because his sister has to have had some beauty to lure Henry VIII all those years.
~Lizzy~