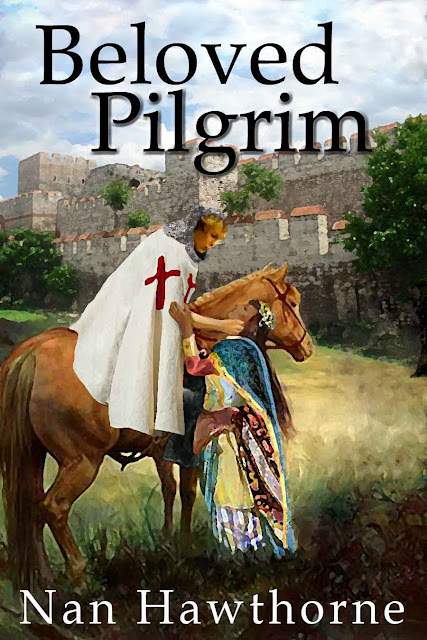 "Unwilling to settle for the passive life of a noblewoman, Elisabeth dons her late twin brother's armor and sets out for the Holy Land. On the journey she learns many things, not the least of which is that she can pass for a young man because, as she says, "People see what they expect to see." Her lessons also include that honor is not always where you expect to find it, and that true love can come in the form... of another woman".

Please welcome the lovely author Nan Hawthorne to Historically Obsessed! Thank you Nan for coming and sharing with us some of the realities of gay releationships in historical fiction novels today. I am proud to have Nan here today to discuss this very relevant topic in historical fiction.With out further delay take it away Nan.
Gay People in Historical Novels
With a widely accepted estimate that ten percent of men and women prefer their own sex for love and lovemaking and most likely always have, it can be difficult to find gay and lesbian characters in historical novels. This issue is important to me as the author of Beloved Pilgrim

whose protagonist is a lesbian. Besides caring that a group of people who have almost no written history should at least be represented in historical fiction, I also worried whether there would be some barrier to my own novel’s acceptance by readers. I wondered about the instances of other gay characters and did some canvassing to find them in well-known novels.

Both my own novels have gay characters. Besides several, both women and men, in my just released Crusades-era novel, Beloved Pilgrim

, there is both a villain and a heroic characters in An Involuntary King: A Tale of Anglo Saxon England

(2008). I like to write about and read about gay people in history, plus with the prevalence of gay people in my extended family, I feel it is important to include that population in any effort to be inclusive. Some people may think that there were no practicing homosexuals in the past, such as the woman who was critical in her review of Brandy Purdy’s The Boleyn Wife

who said that if there were so many gay people in the Tudor court they would all be executed. I don’t accept this for several reasons, not the least of which is common sense. But more on that another time. It is simply both important to me and to my liking to have gay people in my books.

I thought over some of the books I have read and also considered the portrayals of these gay characters. Candace Robb’s Owen Archer series starts with THE APOTHECARY ROSE

with its predatory Summoner who murders his former lover, and I have wondered if a negative response to the characterization led to her development of the spy Martin Werther and his lover, the musician Ambrose, who are both complex and appealing and gain more support from Owen and Lucy than I even would have expected. Other historical mysteries include gay characters, such as Priscilla Royal’s Prioress Eleanor mysteries with the gay Brother Thomas, and I understand Jeri Westerson has a new gay character coming up in her Medieval Noirs.

Priscilla Royal, by the way, told me that she thinks the prevalence of romances in historical fiction may be the reason there are not so many gay characters in our novels. She points to Diane Galbadom’s novels and says, “For non-romance readers, however, gay characters are often welcome because they add a dimension to life in the era which isn't discussed much.”

There are of course historical figures who are believed to have been gay, perhaps most prominently Edward II of England and his lover, Piers Gaveston, about whom several novels have been written, including Purdy’s The Confession of Piers Gaveston

and Shield of Three Lions: A Novel

by Pamela Kaufman, though Sharon Kay Penman has her well-reasoned doubts, but at least two novels about William Rufus, Valerie Anand’s King of the Wood

and Parke Godwin’s Robin and the King

has the horticulturalist John Tradescant in love with George Villiers who was himself generally believed to be in sexual relationships with James I and Charles I. Historical figures portrayed as gay also include Christopher Marlow, William Shakespeare, Byron and, of course, Oscar Wilde.

There are some societies that we know had a greater acceptance of sexual diversity, in particular the Ancient Greeks and Romans. Mary Renault’s Alexander the Great is only one of the novels that tell a gay love story. This is also where you will find lesbian characters, most notably the original Lesbian, Sappho, in Sappho Sings

by Peggy Jay Ullman and others. There seem to be many fewer lesbians in other historical novels. Gregory’s The Wise Woman has the title character courted by the mistress of the house in which she lives. The web site Bosom Friends http://bosomfriends.wordpress.com, which I edit, has a list of lesbian historical novels.

The average reader is probably not aware of the whole industry of gay male or “M/M” novels, mostly romances. You can find more on this at Speak Its name http://www.speakitsname.com and The Macaronis http://historicromance.wordpress.com/. There are several such novels that take place in the Age of Sail, most prominent of which are books by Alex Beecraft, M. Kei and one by Mel Keegan. What might surprise you is that many of the male-named authors, like Alex, are actually women. There are lots of women readers of them as well. I plan my own M/M Civil War era novel for the near future. But there does not appear to be as much in the way of what one could call F/F historical fiction, though it is on the rise. I am currently reading The Warrior’s Path by Catherine M. Wilson and long ago read Isabel Miller’s Patience & Sarah about a couple who travel into the wilderness in America to carve out lives for themselves.

There are so many topics we could explore with this subject, such as why there is so little documentation of gays and lesbians in history, what life would have been like for people who sought their own gender for love, and, in another vein, why readers might or might not want to see gay characters in novels. If this last is a possibility, then I worry that the readers, like the woman who said “I’m not a lesbian, so I don’t read lesbian romance", will avoid a book like mine. Gay people don’t generally take that tack with straight novels but read for the story, and I would hope that straight readers would do so as well. As I said to the woman who doesn’t read lesbian romance, I’m not a lesbian and I wrote one! There is also the strong possibility that mainstream publishers would be chary of novels with strong gay themes. I hope to have the opportunity to explore these in other essays.

Stereotypes do come out in literature, including historical novels. I have found that people with disabilities and people who are fat are more likely to be negatively represented, and I would tend to assume the same might be true for gay and lesbian characters. One I have run into is tied to another, that gay characters were the victims of child sexual abuse or that gay men in particular seek out underage boys for sex.

I am making no pronouncements here but hoping to engender discussion. What gay and lesbian historical novels have you read? And what did you think of the portrayals both of the characters and their societies?

Nan Hawthorne is the author of Beloved Pilgrim, a novel about a woman who chooses to live and fight as a man in the doomed Crusade of 1101. It is available at Amazon and Smashwords, and should be on Kindle and Amazon.co.uk shortly. 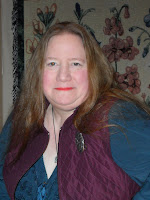 
Nan Hawthorne is a historical novelist who lives in the beautiful Pacific Northwest with her husband and doted-upon cats. She has been in love with history and historical fiction since, at four, she discovered the Richard Greene “The Adventures of Robin Hood” television series. She wrote her first short story at seven, then launched into the letters and stories with a teen friend that ultimately became her first novel, AN INVOLUNTARY KING: A TALE OF ANGLE SAXON ENGLAND (2008). The author of one nonfiction work on women and body image, she now concentrates primarily on historical novels set in the Middle Ages. Her latest novel, BELOVED PILGRIM, looks at gender identity and self-realization during the chaotic and doomed Crusade of 1101. She writes several blogs on historical themes, owns the medieval-novels.com catalog and also Internet radio station, Radio Dé Danann.