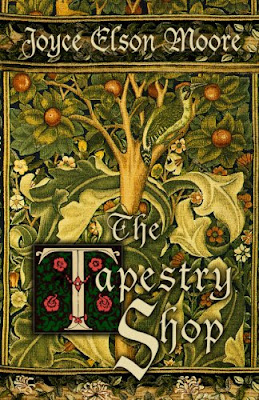 "The Tapestry Shop", by Joyce Elson Moore, is an historical novel based on the life of Adam de la Halle, a poet/musician who left behind a vast collection of secular compositions. While researching Adam's music, Moore discovered a little-known fact; the earliest version of the Robin Hood legend may have been Adam's play, Le Jeu de Robin et Marion. Because Adam was patronized by royalty, his play was probably performed in English courts, and would have changed, as legends do. In the retelling, Robin became an English hero, and Robin's companions became the Merry Men.

The book draws the reader into the Middle Ages, where women joined the crusades and students held discourse on the Street of Straw, but the overriding appeal of The Tapestry Shop may be Adam's connection to the popular legend of Robin Hood, the celebrated outlaw who was immortalized in later ballads, and who continues to draw fans around the world to films that center on this elusive hero".

Lets kick off this killer giveaway!
The giveaway is for one advance readers copy. This one is only open to the US residents. Giveaway ends May 15th 2011 at midnight west coast time.
For 1 entry enter your name and email
For 2 entries be a follower and say so in the form
For 3 entries share this and add a real link.