Anne Boleyn was beheaded on the tower green on May 19 1536 475 years ago today. Anne is by far leading lady of my heart because she was a smart capable woman who was way ahead of her times. I feel Anne was a victim of the men in her life including her father. I also have throw out there the Rh Negative factor in her numerous miscarriages. For more on being Rh Negative read here but basically it means the new babies blood is not compatible with the mothers and today women would receive a shot to counteract the incompatibility. It has been proven that most woman with Rh Negative can produce at least one living girl child before the incompatibility kicks in, weird I know but from what I have gathered true. Even my own mother is Rh Negative and her first born was a daughter and then the shots began with the second one. In my heart of hearts Anne was a good woman, a brave woman who even in the face of the greatest peril held her head high with the dignity she rightly deserved. 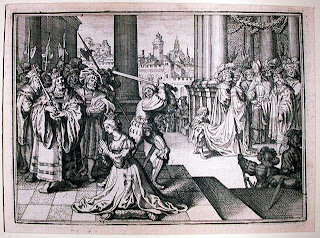 The beheading of Queen Anne Boleyn, the second wife of Henry VIII Tudor, on the 19th May 1536 at Tower Green. In the background the Tower of London. On the left Henry VIII. On the right Lady Jane Seymour.

"Good Christian people, I am come hither to die, for according to the law, and by the law I am judged to die, and therefore I will speak nothing against it. I am come hither to accuse no man, nor to speak anything of that, whereof I am accused and condemned to die, but I pray God save the king and send him long to reign over you, for a gentler nor a more merciful prince was there never: and to me he was ever a good, a gentle and sovereign lord. And if any person will meddle of my cause, I require them to judge the best. And thus I take my leave of the world and of you all, and I heartily desire you all to pray for me. O Lord have mercy on me, to God I commend my soul."

The Concubine: A Novel

To Die For: A Novel of Anne Boleyn

The Six Wives of Henry VIII