I know what your thinking another author during HFBRT event WTH. I had this lined up for quite some time and I just could not pass it up for your benefit. Kate Quinn is author of "Mistress of Rome" which was just released on April 6th. Please welcome guest author Kate Quinn to Historically Obsessed with a very exciting post on Fashion and her new book is up for giveaway!


Historically Obsessed with Fashion
Any woman who has ever read Gone With The Wind remembers the same scene:  the scene where Scarlett O’Hara primps for the barbecue party where she plans to seal her romantic fate, and culls through her wardrobe in an effort to find The Dress.  Those of us who adore Gone With the Wind know that scene by heart, and every dress in it – the lavender dress (too wishy-washy), the black dress (too sedate), the plaid dress (stained), and the green muslin, which Scarlett ultimately chooses.  That scene is a marvelous piece of character development, but that isn’t why we all know it by heart.  We know it by heart because historical fashion is fun.  Women might read historical fiction for the politics, for the prose, for the men with swords, but one reason we all like it is for the clothes.  Why else does almost every historical fiction novel out there feature a woman in a stunning dress on the cover?
Of course, the attractiveness of the clothes depends on the era.  Civil War fashion as in Gone With The Wind is fun because of those huge billowing skirts and enormous hats.  I’ve always had a weakness for 18th century fashion – gowns fluffed out to the side with towering hair.  Everybody likes those high-waisted Regency dresses.  And the Roaring Twenties are always picturesque, even though no one but a supermodel can carry off those hip-slung slips.  But that’s part of the fun of historical fashion – we can all be as slim and picturesque as we like in the clothes of eras past, at least in our imagination.
There are so many good dress moments in great historical fiction novels, and believe me, I can list them all.  The green halter dress where Ian McEwan’s Cecilia met Robbie in the library in Atonement.  The crested black silk kimono where Arthur Golden’s Sayuri pledges her love to the Chairman in Memoirs of a Geisha.  The pink lawn gown in which Laura Ingalls Wilder of the Little House series is courted by her future husband.  The green surcote in which Anya Seton’s Katherine attends her first tournament.  The golden-brown dress with puffed sleeves that fulfills all the childhood dreams of L.M. Montgomery’s Anne of Green Gables.  Good dress moments, in historical fiction, are like icing on the cake for me – not an integral part of the book, perhaps, but deeply satisfying nonetheless.
Ancient Rome had excellent fashion – draped silks look good on everybody – and this is probably one reason why I wrote a book set in first century Rome .  What’s the use of having historical fiction heroines if they can’t wear good clothes?  My villainess Lepida might be an evil shrew, but at least she has impeccable dress sense: silks in nile green and sapphire blue, pearl cuffs, ruby hairnets, gold sandals.  My heroine Thea is a slave girl for much of the book, but midway through she’s purchased by the Emperor – I can’t say this is a huge step up for her, since he’s an utter psychopath, but at least she can get out of those dreary wool tunics and into something chic.  (She’s a tall olive-skinned brunette, so we’re looking at smoky blue and purple dresses, amethyst chokers, gold circlets and topaz earrings.)
Of course, there are some historical eras where the fashion is fairly unfortunate.  1830s England , for example – many significant political and historical things happened during that era, but I cannot and will not set a novel there because I can’t face putting any heroine of mine in an 1830s dress.  I may not always be kind to my heroines – they get sold to psychopathic Emperors and tormented by bitchy villainousness's – but even I am not cruel enough to put a girl of mine in huge puffed sleeves and bunchy curls.  Enough is enough.
Thank you Kate for the insight on "Mistress of Rome" and... 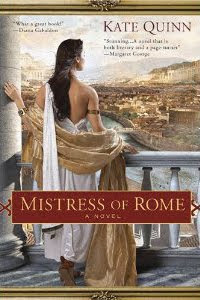 Now The Giveaway!
RULES
* For 1 entry leave me a comment with a way to contact you.    * For 2 entries follow my blog. If you already do, thanks, and please let me know in the comments. You're eligible for the extra entry as well.    * For 3 entries blog or tweet this giveaway to spread the word.
This contest will run for one week and it us for US residents only. The winner will be drawn using Random.org and posted on the 15th, which means contest ends on April 14th at MIDNIGHT.
Good Luck to all!

"Quinn convincingly conjures the terrifying reign of Emperor Domitian in her solid debut that follows the travails of Thea, a slave girl and mistress to the emperor. While she is tormented by Domitian, she holds her secrets—a gladiator lover, a young son—close. When these facts are brought to Domitian's attention by Thea's jealous rival, Thea takes drastic actions to secure her family. Quinn's command of first-century Rome is matched only by her involvement with her characters; all of them, historical and invented, are compelling and realistic, and she explores their dark sides without crossing into gratuitousness. Readers will finish eager for a sequel, which is a good thing because Quinn has left the door wide open for a follow-up. This should make a splash among devotees of ancient Rome".