Mailbox Mondays and Thank You Kristin From Always With a Book

To The Tower Born by Robin Maxwell

"In 1483, Edward and Richard of York—Edward, by law, already King of England—were placed, for their protection before Edward's coronation, in the Tower of London by their uncle Richard. Within months the boys disappeared without a trace, and for the next five hundred years the despised Richard III was suspected of their heartless murders.
In To the Tower Born, Robin Maxwell ingeniously imagines what might have happened to the missing princes. The great and terrible events that shaped a kingdom are viewed through the eyes of quick-witted Nell Caxton, only daughter of the first English printer, and her dearest friend, "Bessie," sister to the lost boys and ultimate founder of the Tudor dynasty. It is a thrilling story brimming with mystery, color, and historical lore. With great bravery and heart, two friends navigate a dark and treacherous medieval landscape rendered more perilous by the era's scheming, ambitious, even murderous men and women who will stop at nothing to possess the throne".

This by far the best take of The Lost Princes I have read to date. It is the last one I needed to complete my Robin Maxwell collection. Now it is on to hardback copies, I have one hardback (To The Tower Born)  and the rest in paperback. I hope to have both styles in my collection someday. 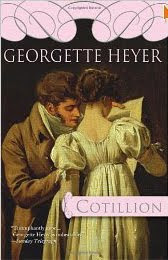 A sham betrothal isn’t the only thing that gets Kitty and Freddy into trouble, but it’s definitely the beginning ..

A most unusual hero, Freddy is immensely rich, of course, and not bad-looking, but he’s mild-mannered, a bit hapless—not anything like his virile, handsome, rakish cousin Jack ...

A heroine in a difficult situation, Young Kitty Charing stands to inherit a vast fortune from her irascible and eccentric guardian—provided she marries one of his great-nephews ...

A sham betrothal, No sooner does Kitty arrive in London then the race for her hand begins, but between confirmed rakes and bumbling affections, Kitty needs a daring scheme ...
Thus begins Cotillion, arguably the funniest, most charming of Georgette Heyer’s many delightful Regency romances".
Amazon.co.uk 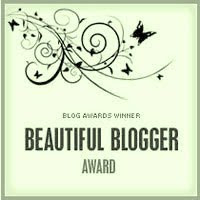 I also happened to get this lovely The Beautiful Blogger award. It was passed on to me by Kristin from Always with a Book

Thank you Kristin it is very pretty!

I am supposed to tell you 7 things about me. Here goes:

1. I love my family and they always come first
2. I love starwars
3. I have a 55 gallon saltwater reef fish tank with 2 clown fish and an anemone
4. I grew up ridding horses
5. I love my Mac G4
6. I am a book "Sniffer"
7. I have a part time job where I work Saturdays

Amazon
To the Tower Born
Cotillion