Book Review: WITH IN THE HOLLOW CROWN by Margaret Campbell Barnes 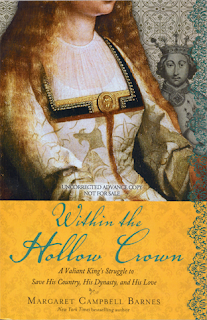 Honestly this was not a new favorite. I believe William Marshall has spoiled me, never could another compare so far. This is not the happy feel good type of read for me. I found I struggled with this one because it was slow in the beginning and I was constantly finding myself lost and confused. It can also be taken into account that I have no background in this time period. I have slowly been making my way towards this period and this is my first read on Richard II of England. I felt that a shadow of "The Greatest Knight" brought to light and emphasized Richard’s shortcomings. It made me feel less sympathetic for a child king who was hard to become attached to. Dang William he ruined me, go go away!

Richard II was the son of the Black Prince and Joan of Kent. His father never lived to become king, which meant that his dying grandfather bequeathed young tender Richard his crown, "nervously" too. Grandpa had good reasons to be nervous too, considering I had a hard time keeping a mental tally of Richards uncles and who did what to who. Richard was lovable at times and other times I despised his cold calculating way. Revenge is a dish that is best served cold. Richard finally redeemed himself in my eyes after the peasants revolt and when he married Anne of Bohemia. Anne was the light of his life and when the light was snuffed out suddenly it was enough to push Richard over the edge.

A part of Richard died with Anne and his life with out her was like living a life with no color, no meaning, and no love ever again. In a depressing downward spiral Richard begins loosing everything to his power hungry uncles but what did it matter with out her? How could it matter that his many uncles held the real power of the crown when food lost its taste?

On a very positive note I found Richards plotting to marry the child Isabelle of France just to gain peace was a genius move. Since she was a child it would be many years before she reached child bearing years, yet Richard had no clue what he would do with her if they did make it to those years. His heart belonged to Anne and she took it with her when she died. It was like Richard always deep in his soul knew how it was all really going to end a kind of foreboding knowledge that comes from with in ones own soul.

3.5/5 Good but need further reading to follow up on. I liked it and defiantly enjoyed it but I felt at times key pieces of information were missing such as character thought processing. As far as historical accuracy Barnes keeps very close to actual events and that is very respectable in a read. I think my issue with this read was Richard; I could not get into him sometimes. I need to read more on this time period to be able to fully grasp the whole situation. I also enjoyed the link from Isabelle. Her story was interesting and I have read The Queens Secret by Jean Plaidy that covers her marriage in England too but from a little sister point of view.  I am going to read more by Barnes I think this time it was just me.

Thank you to Sourcebooks for sending me a copy of the book.