Today In History, Lent and Eleanor of Aquintane

I felt it was just the perfect time to cover this for all the avid historical fiction fans. Just like the Eve of Saint Agnes, Lent is also another part of historical novels. To truly grasp a character you have to experience as a reader all aspects of this person. One thing that tends to be glossed over sometimes in reading is that the person might just be a spiritual person. Lent has always been the dreaded event in some reads and in others it is merely a brief mention of fish for dinner. For this particular issue I went straight to the source and got some real awnsers courtesy of my local Paster "Karl" from Emanuel Lutheran church. He was kind enough in walking me through the explanation of Lent. Lets all just get this off the table and settle it down once and for all and clear up any misconceptions.
Q: What is Lent?
A: It's the 40-day period of repentance and renewal preceding easter. Lent begins on Ash Wednesday and ends with the Easter service. Holy Week commemorates Christ's last week of life on earth. It's the final, most important part of Lent.
Q: Why is it important?
A: The Lenten period allows us time to recall the easter story and absorb its meaning.  Christ lived and died to redeem the world from sin. Because of Christ's death and resurrection, our lives can be renewed: we can renounce sin and begin to live for god.
"Lent During the middle ages: Strict 40-day fasts (abstinence from meat and other foods), not attending festivities, etc., were obligatory for Christians. Gradually these practices became less rigid".
"Todays Lent: The emphasis has shifted from long periods of fasting to prayer, meditation and reflection on the meaning of Easter. Lent remains important as a time of preparation for and renewal of baptism". 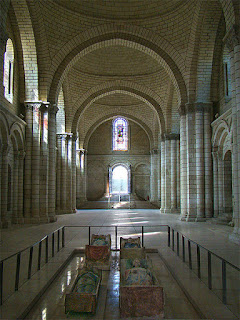 "Fontevraud Abbey, Maine-et-Loire, Pays de la Loire, France. Nave of the abbey church of St. Mary. In the foreground, the effigies of Richard I of England, Isabella of Angoulême, Henry II of England and Eleanor of Aquitaine (from right to left, front to back)". 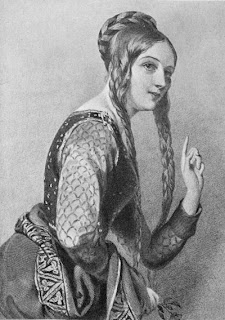 Besides being Easter Sunday today it is also the day that Eleanor of Aquitaine passed away in the year 1204. I am just starting to cultivate my love for Eleanor but it has been a long time coming. I really can not wait to read "The Queen's Pawn" by  Christy English to go further with her. "The Greatest Knight" by Elizabeth Chadwick was a great way to sprout the little obsession I had inside me. Plus I am officially in love with William Marshal and he was her greatest champion ever, ... sigh.
"Eleanor died in 1204 and was entombed in Fontevraud Abbey next to her husband Henry and her son Richard. Her tomb effigy shows her reading a Bible and is decorated with magnificent jewelry. By the time of her death she had outlived all of her children except for King John and Queen Eleanor".