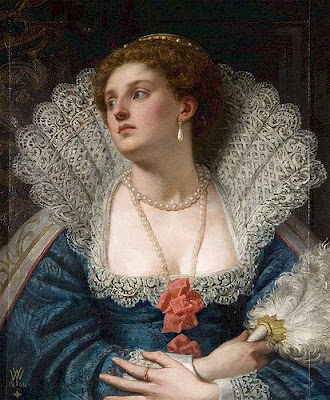 Michelle Moran posting an interesting link in the news a new incident report was found and holy smokes it is a big one. All of you know I can not pass up anything that has to do with Robert Dudley.

~Did Elizabeth I's 'lover' have wife killed so he could wed the Virgin Queen?~

"It has been the subject of fierce debate for more than 400 years.

Now new evidence has emerged that supports the theory that Amy, the wife of Elizabeth I's close friend and suspected lover Robert Dudley, was murdered so her husband could marry the Queen.
Amy died aged 28 in 1560 after breaking her neck while falling down the stairs at Cumnor Place in Berkshire."


"Amy Robsart was the first wife of Lord Robert Dudley, the 1st Earl of Leicester and a favorite of Queen Elizabeth I. Legend has it that Robert arranged to have Amy murdered, so he would be free to marry Elizabeth. An official inquest cleared him of wrongdoing, but the story persisted and the scandal is thought to have played some part to discourage the Queen from marrying Dudley. Robsart's story became very popular in the 19th century thanks to Sir Walter Scott, who made her the tragic heroine of his novel Kenilworth; I think it likely that the popularity of that work inspired both this painting and another by the same artist."

I would love to hear what others think about this because for the longest time I just have always had this feeling. Either way poor Robert did not get Elizabeth and he lost Amy too, maybe some things are better off just being left alone?