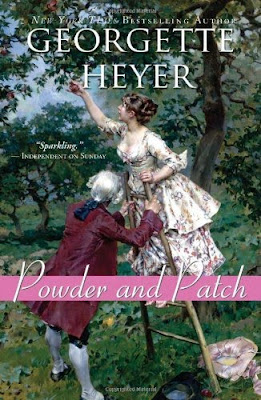 I really have been missing out on the whole regency romance gig. I now can proudly say I have number two under my belt.

Powder and Patch was a darling read. Set in England and France during which the fashion of the time was wearing powdered wigs, make up, and high heels. Philip Jettan was a down to earth country gentleman who was lacking in “polish” as his father stated. He was painfully blunt and had not one single vanity about him. That is until his childhood love, his hope to be betrothed, the beautiful Cleone Charteris draws the attention of a newly arrived powdered and patched gentlemen by the name of Mr Bancroft. Cleone began to waver on her feelings for Philip because she concluded she would like a man with “polish”. Philip did not fit into that grouping.

Cleone and Philip cared profoundly for each other having grown up together. But she had other dreams of what her kind of man was; she did care about “frivolities” as Philip had put it. Somewhere inside of her were unanswered feelings for Philip and he knew it. To defend his status with her he baited Mr Bancroft into a duel. Proving Philip's lack of “polish” he was defeated by Bancroft. Even worse for Philip, Cleone had the impudence to chastise him for his lack of gentlemen skills. With that Philip left her for London with only with a promise from her she would wait. He would have to go to his uncle, like his father had told him so many times before.

Upon Philip’s arrival and full discussion with his uncle of his situation, the two men decided he should disappear to Paris for his transformation. Awh Paris, the late nigh parties, courtiers, and powdered faces were a sight to behold in themselves. I swear you could just smell the perfumed, gem-encrusted fashions. Philip lived up to his “short shirt” potiental and became everything Cleone wanted. Thing between them however had turned sour. He wanted real love, to be loved for who he truly was, not for what he dressed like. Oh a tangled web we weave ourselves into for love. A few mishaps and everything could be lost forever.

5/5 LOVED it! I hated how short it was though. A super short read at actual story meat at about 180+ pages. I loved the details of the fashion of the time. Brooches, hairpins, silk stockings, and dripping in lace, Heyer beautifully details everything. So Austen, it is charming.

Thank you to Source Books for sending me this beautiful novel. I loved it.